Albert G. Flor, 96, of New Richland died Sunday, April 23, 2017. A Mass of Christian burial will be at 11:30 a.m. Saturday at All Saints Church in New Richland. The Rev. Michael J. Cronin will officiate. Visitation will be from 9 to 11 a.m. before the service.

Albert was born June 25, 1920, in New Ulm, the son of Albert Daniel Flor and Marie (Inhofer) Flor. Albert attended Trinity Catholic School in New Ulm and graduated in 1938. He went on to attend College at St. John’s in Collegeville and furthered his education in an accelerated program at the University of Minnesota School Of Dentistry, where he graduated with a Doctor of Dental Science degree in 1943.

Albert was asked to serve his country and was commissioned as a second lieutenant in the Army Dental Corps from 1942 to 1945. On Sept. 2, 1943, Albert married his sweetheart, Lois Margaret (Ganske) Flor, while completing dental school and serving on many Army bases in the southern United States. 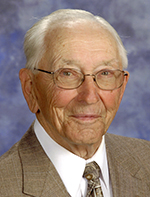 Albert and his wife, Lois, moved to New Richland after World War II, where he began his private dental clinic and raised his family. Albert loved his family and his career as a dentist, and provided dental care for many people in southern Minnesota for more than 50 years.

Albert was preceded in death by Lois, the love of his life of almost 60 years; his parents; his first born son, baby George; and granddaughter, Angela Anderson.

Albert pretended to retire and thrived on being busy. He enjoyed summer nights at his cabin on St. Olaf Lake. He enjoyed building utility trailers and picnic tables for his family. He loved fishing and he couldn’t wait to have a fish fry. He made note pads from recycled paper that he gave away as gifts. He continuously volunteered in the community. Albert had a strong faith in God and his country. He cherished, loved and surrounded himself with his family and friends. He savored his dark chocolate candy. Albert celebrated each day to its fullest. His family said they are all going to miss his smile.