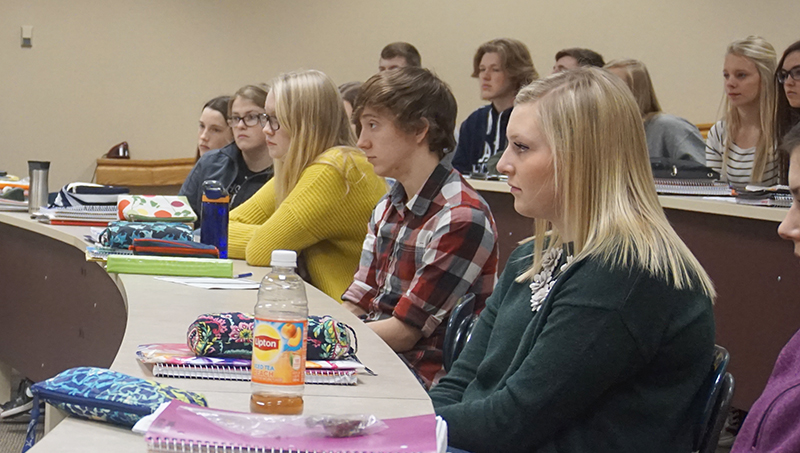 Theatre artist and Albert Lea native, Eva Barr, after receiving an artist Initiative grant from the Minnesota State Arts Board, has been working with high school humanities teacher, Jim Haney, to introduce his 11th grade humanities students to Cheri Register’s memoir, “Packinghouse Daughter,” about being teenage and working class in Albert Lea during the 1959 Wilson & Co. strike. The Packinghouse Daughter Project, which has included contributions from a number of Albert Lea natives, will culminate in a number of student-based public events.

There will be self-guided history tours from 4 to 6 p.m. April 29  in downtown Albert Lea and at the old Wilson & Co.’s plant site; and at 7:30 p.m. there will be a public reading in the high school auditorium of the first draft of Barr’s stage adaptation entitled “Wilson Girl: Unpacking the Beef in a Minnesota Town.”

All events are open to the public. Donations are welcome. 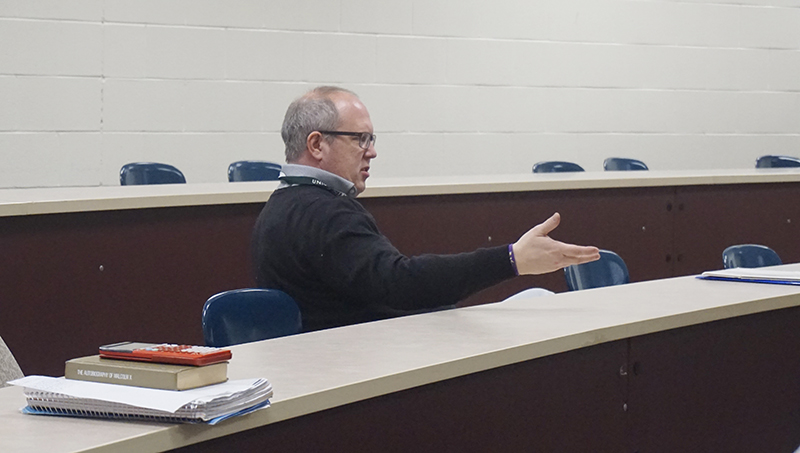 Jim Haney, Albert Lea High School humanities teacher, joins in on a discussion with author Cheri Register during one of his classes. – Provided

The Packinghouse Daughter Project has been a four-month process revolving around Barr’s goal of adapting Register’s memoir into a performance piece. The script development process has included collaborations with other Albert Lea natives, including author, Cheri Register, dance artist/historian, Jane Skinner Peck and singer/songwriter, Margaret Ehrhardt. The text incorporates student writing as well.

Barr combined her writing process with residency work in the high school in order to craft a piece that, while based in mid-20th century history, would have contemporary relevance. By introducing “Packinghouse Daughter” to students in its town of origin, a town where the packinghouse used to be, Barr hoped to learn what content students would find most compelling and necessary for a stage piece today. The grant project had a number of steps.

The first step was a research and interview period for Barr. Though most of her script is drawn from Register’s book, Barr found it crucial that she understand the broader context of the meatpacking industry and labor and class issues associated with it, and that she hear firsthand from Albert Lea residents who were alive during the strike.

Though it has become harder to find people with 1950s work experience in the Wilson & Co.’s plant, Barr felt fortunate to receive interviews with Chuck Lee, president of the UPWA Local 6 in 1959, and his wife Tootie, Ron Felt, Arliss Bachtle, Ethel Underlynd, Bernie Priebe and Alice Daffenrud, among others, who worked at Wilson & Co. in the 1950s.

The research step informed the residency step: one week at the high school in January with three different humanities/history classes, discussing chapters of Packinghouse Daughter, and generating student writing.

In February, the humanities classes got to interview a panel of people who either lived in Albert Lea in 1959 or worked at the plant or both.

Barr noted that it was hard to find anyone who admitted to crossing the picket line during the Wilson & Co.’s strike to be on the panel, which is evidence how deep the divide that was caused by the strike was. In any case, students were encouraged to look at the events and choices surrounding the strike from multiple perspectives before drawing conclusions. 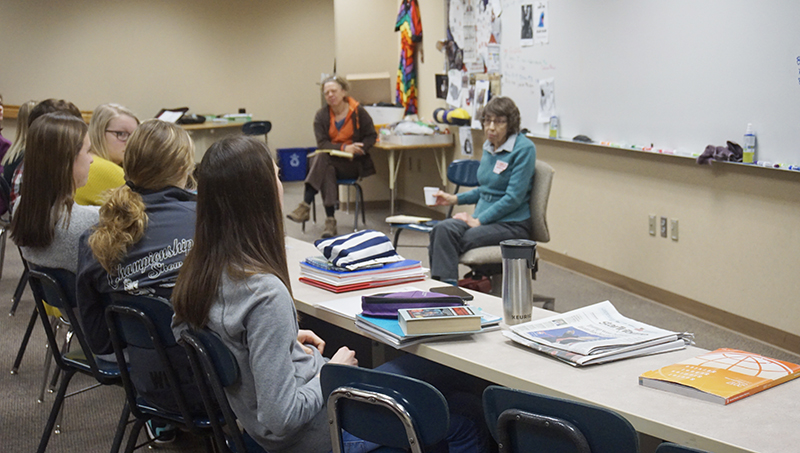 At the end of March, Barr presented a first draft of her script to one of the classes for reading and feedback. Students got a taste of the challenge of a cold reading, putting flesh on emerging characters and new ideas. They also got to express criticism and appreciation.

According to a press release, Haney commented that it was fun to be teaching history through a play.

The month of April is devoted to the final, interactive steps of the project, steps with which the public also will be invited to become involved. Two of the three humanities classes are conducting research into 1950s Albert Lea at the Freeborn County History Museum.

One class is looking at the downtown business district and the other class is looking specifically at the Wilson & Co. plant. Each class is divided into small groups, each of which has chosen a venue or aspect of the strike as living historians.

The public is invited to follow maps available at the Civic Theatre or the Wilson & Co.’s website on self-guided tours from one group of students to the next as students tell stories about an Albert Lea of the past. The presentations will be outside on the sidewalks or on the grass.

Visitors can park in the city lot on North Broadway downtown, or directly on the vacant Wilson & Co.’s site.

In the event of rain, students will present stories and research in the high school cafeteria.

The third humanities class will be reading the current draft of Barr’s script, “Wilson Girl: Unpacking the Beef in a Minnesota Town” at 7:30 p.m. April 29 in the Albert Lea High School auditorium.

The suggested donation for the reading is $5. There will be a discussion after the reading, so Barr can receive feedback from the public for the play’s further development, and for the public to share stories and memories of the Wilson & Co.’s plant and Albert Lea in 1959.

Informal discussion may continue at a post-reading reception in the ALHS cafeteria.

Because the Packinghouse project represents Albert Lea life in 1959, students will be wearing period costumes — thanks to assistance from Albert Lea Community Theatre and Lilah Aas. Any visitors who would like to dress accordingly are welcome to do so.

Barr also invites anyone with a 1950s vintage car to park it along Broadway/ downtown on Saturday afternoon.