The Albert Lea Tribune has hired a new reporter who will benefit the company through a number of ways.

Seffinga is a lifelong Eau Claire, Wisconsin, resident who graduated from Regis High School in 2011. She graduated from the University of Wisconsin-Eau Claire in 2016 with a degree in political science and multimedia communication. She was a track and field athlete at the school, participating in the heptathlon. 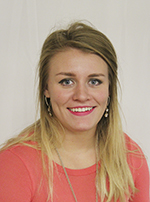 Seffinga said she was looking for a change after college.

“I knew that I wanted to do something more creative, and I think my favorite part about this is that I can meet new people and can kind of interact with people every day,” she said.

Seffinga said she has adjusted well to living in a new town for the first time in her life.

“I really have enjoyed that part of it so far,” she said.

Her fiance, Matt Seffinga, is store manager of Bauer Built Tire & Service. The two will be married in early June.

Evelyn Seffinga has taken her married name for her byline.

She can be reached at 507-379-9852 or by email at evelyn.seffinga@albertleatribune.com.

In her spare time, she enjoys walking her two dogs and watching the news, and has been planning her wedding for the past year.