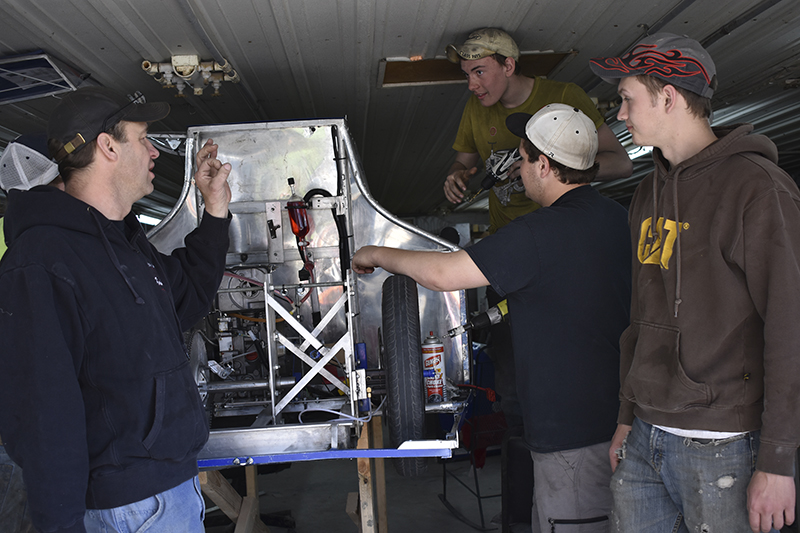 The Alden-Conger supermileage team is competing this week at Shell Eco-Marathon. - Provided

ALDEN — Alden-Conger’s supermileage team is taking to the track to see if it can once again break national records.

The Shell Eco-Marathon is a unique competition that challenges students around the world to design, build and drive the most energy-efficient car.

There are three annual events in Asia, America and Europe. Student teams take to the track to see who goes further on the least amount of fuel.

Thirteen of Alden-Conger’s brightest engineers are in downtown Detroit battling teams in this year’s Shell Eco-Marathon.

Over several days, the teams make as many attempts as possible to travel the furthest on the equivalent of one liter of fuel. Cars drive a fixed number of laps around the circuit at a set speed. Organizers calculate their energy efficiency and name a winner in each class and for each energy source.

“This is the third year the event has been in Detroit,” said team member Josh Majerus. “It’s a .6-mile track right downtown.”

The team left Alden Tuesday after more than six months — and hundreds of hours — of work.

“We prepare for indoor runs on Friday, and the actual competition is Saturday and half of the day Sunday,” Majerus said.

The competition is split into two classes or categories. The Prototype class focuses on maximum efficiency, while passenger comfort takes a back seat. The UrbanConcept class encourages more practical designs.

According to team member Logan Sailor, this year the group’s Prototype car contains a new motor.

“It has been a learning curve for the entire team, but it will be nice to have the extra power when we are out there,” Sailor said. “We are really appreciative of Mike Bute, who has spent a lot of time teaching us and helping with the new motor.”

The Prototype, Sailor said, is a small car where the driver has to lay down to drive it.

“It has lower visibility,” he said.

“Our goal this week is just to beat our personal best with that same car,” Sailor said.

“Not only do we have a new driver for this car, but it’s always a constant work in progress with turn signals, headlights, luggage rack, windshield wipers and everything needed to be street-legal,” Majerus said. “This car got the team 546 mpg when in London.”

The competition dates back to 1939 when Shell Oil Co. employees in the United States made a friendly wager over who could travel furthest on the same amount of fuel. Since then, it has expanded to two more continents, includes many energy types and sparks passionate debate around the future of energy and mobility.

With new advisers and a different shop location, the team said it has been a great year so far.

“We just want to be able to compete as we have in the past, and continue to improve,” Sailor said.

Majerus said the new shop space has been an asset to the team.

“It’s fun to be able to be all together when working and not spread out,” he said. “We have learned to work at the same time and that has its benefits.”

The team noted, “none of this would be possible without all our amazing sponsors and the great community support,” Majerus said.

A large sponsorship was made this year by Fastenal.

“Not only were we given multiple toolboxes, but the parts and tools to fill the drawers,” Sailor said. “Every single one of our sponsors is important, and we wouldn’t be able to do it without them.”