Memorial services for Charles “Bob” R. Morrison will be at 2 p.m. April 29 at First Presbyterian Church in Albert Lea. The Rev. Dwight Netzer will officiate. A visitation will be one hour prior to the service. Interment will be in Freeborn Cemetery. 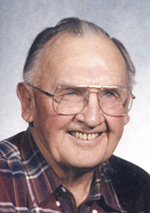 On Nov.6, 1939, Bob was united in marriage to Bernice E. Peterson in Kalispell, Montana. For their honeymoon they hunted bighorn sheep. The couple farmed until 1944 in Freeborn County. During the war Bob took a wartime appointment with the Department of Interior at Pine Ridge Indian Reservation.  He ran the government dairy farm at Pine Ridge, having trained at the University of Minnesota School of Agriculture in St. Paul prior to his marriage. In 1948, when the war was over, the Morrison family returned and Bob went to work for Pete Christensen in Freeborn. Bob eventually bought the hardware and equipment business. He started to sell pumps, and sometimes customers needed a new well. He then decided to go to school for well drilling, bought a drilling rig and started to drill wells. His first well was in the Indian Hills area in Albert Lea. Bob was an entrepreneur. He started Morrison Well Drilling Co. in 1948. Even into his late 90s, Bob would go to Freeborn every day to get the mail, stop for coffee and be at the shop by 9 a.m. He also loved to grab lunch and play a game of cards with the fellows in the afternoon. Bob remained active in the company until Jan. 6, 2016, at 98.

Bob and Bernice were members of Freeborn Congregational United Church of Christ. They resided in Freeborn for most of their married life, but moved into Albert Lea and eventually Thorne Crest Senior Living Community in their later years. They had a love for traveling, especially to foreign countries.

He was preceded in death by his wife, Bernice; parents; brothers M.T. (June) Morrison and Bill Morrison; and brother and sister-in-law, Robert and Florabelle Hanson.