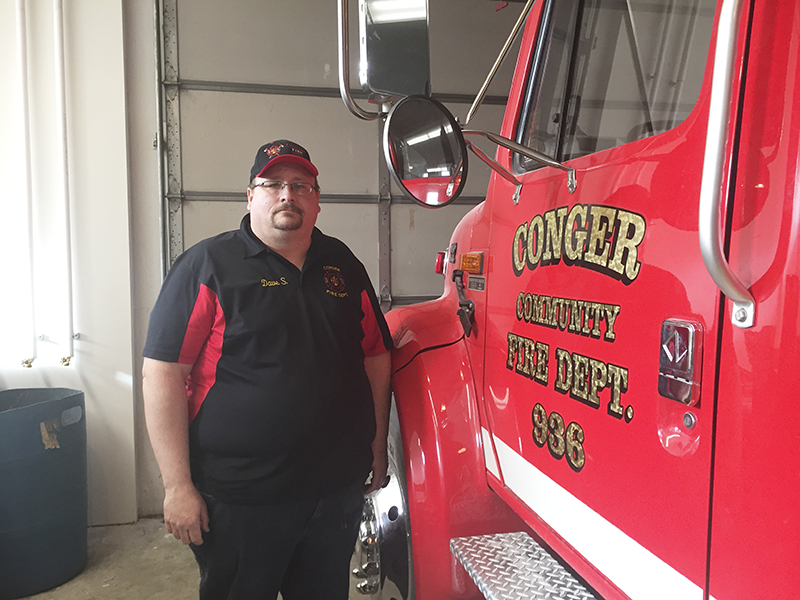 Dave Steele has been a member of the Conger Volunteer Fire Department for seven years and just began his three-year tenure as fire chief. Steele took over the duties of chief from Jeremy Linn last month. - Kelly wassenberg/Albert Lea tribune

According to the new fire chief, Dave Steele, the event is a long-standing tradition and one of two fundraisers the crew does each year.

“It helps support the organization and helps us to try to keep our equipment current and up-to-date,” Steele said. “A lot of fire fighting equipment has a lifespan that it’s required to be replaced in.”

Funds from the pancake supper will help replace items like the self-contained breathing apparatuses the firefighters use.

The fire department crew, along with its first responders, also host a pork chop supper in the summer.

“It helps us out quite a bit throughout the year,” Steele said of the proceeds of the events.

In addition to the city of Conger, the fire department covers 48 sections of Alden, Nunda, Pickerel Lake and Mansfield Townships and broadens its reach when services are used for mutual aid. During mutual aid calls the department is dispatched to help aid other departments within the county as well as the communities of Walters and Kiester.

According to Steele, about one of every two of the department’s fire calls are for mutual aid.

Steele said the pancake breakfast brings in about 500 guests every year who dine on an all-you-can-eat breakfast of eggs, pancakes, French toast, breakfast sausage, milk and orange juice. The meal is prepared and served by the department’s 25 crew members, including its first responders and their family members.