Memorial services for Daniel L. Thompson of Albert Lea will be at 10 a.m. Friday at United Methodist Church of Albert Lea. The Rev. John Mitchem will officiate.

Daniel was born July 2, 1961, in Austin, the son of Daren L. and Jean (Kamp) Thompson. He attended public school in Austin and Forest City. Daniel attended work corps for brick and block masonry and worked in that industry for several years. On July 3, 1998, he was united in marriage to Mary Ballhagen at United Methodist Church in Albert Lea. 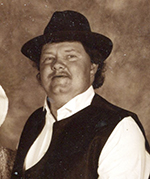 Daniel resided in Albert Lea for the past three years and in his free time enjoyed woodworking and tinkering on vehicles.

Daniel was preceded in death by his father; mother-in-law, Jacqueline Ballhagen; Kamp and Ballhagen grandparents; brothers James and Steven Thompson; and aunts and uncles.