David passed away after a long battle with cancer on Sunday, April 9, 2017, at Good Samaritan Society of Albert Lea. He was 57.

David Ramirez was born Dec. 6, 1959, to Richard Ramirez and Rita (Perez) Johnson in San Antonio, Texas. David grew up in Albert Lea and was a resident most of his life. On April 29, 1989, he was united in marriage to Lisa (Christopherson) in Austin. To this union, two daughters were born, Rose and Riki. The couple would later separate. 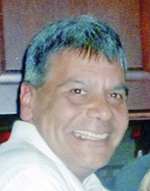 David worked many odd jobs throughout his career. For 13 years he worked in the maintenance department at Mystic Lake Casino in Shakopee. In his free time David enjoyed nature and the outdoors. He liked camping and fishing. David was a Vikings fan through the good times and the bad. He liked watching cooking shows and he liked to cook. David enjoyed listening to various types of music, with rock music being a favorite. He liked to laugh and could easily make other people laugh. David adored his beloved dog, Zowie. Above all, family was most important to David. He loved spending time with his two daughters, as well as his siblings and mother.

He is preceded in death by his father, Richard; stepfather, Stanley Johnson; maternal and paternal grandparents; brother, Richard; as well as many aunts, uncles and other family members.

He was loved by all and will be deeply missed by all who knew him.