A celebration of life service will be at 4 p.m. today at Bonnerup Funeral Service, 2210 E. Main St. in Albert Lea. The Rev. Lee Freshour will officiate. Visitation will be at 2 p.m. today until the time of the service at the funeral home. Interment will be at 10 a.m. Monday in LeSueur River Lutheran Cemetery, 16650 250th Ave. in New Richland. All are welcome.

Doris was surrounded by her family as her earthly adventure ended. She is now with her personal Lord and Savior on her greatest adventure ever.

Doris Evelyn (Sandsmark) Waltz was born Nov. 15, 1928, on the family farm in Waseca County.  She was the daughter of Oscar and Mable (Neumann) Sandsmark. Doris grew up in rural New Richland and attended country school. 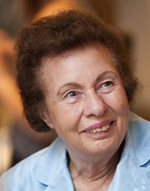 She was united in marriage to Dean C. Waltz on June 20, 1948, in Hartland. To this union, eight children were born.

Doris graduated from Mankato State University and also obtained her master’s degree plus 30 in elementary education.

She taught fifth grade at Lincoln Elementary School in Faribault until she retired. Doris enjoyed life on the farm with her family, especially holidays and other special events. She enjoyed watching and working with the buffalo on her farm, dancing to Lawrence Welk, old-time music, sewing, card playing, traveling, cooking, reading about Abraham Lincoln to her grandchildren and listening to Billy Graham on the radio.

She was a member of North Freeborn Lutheran Church. Doris was considerate, generous, helpful, loving, caring, kind, compassionate and would put others’ needs ahead of her own. She was known for her many cooking talents and her family said anyone who knew her would agree.

She is now an angel in heaven and will be lovingly missed and always remembered.