Private graveside services for Dorothy M. Paluch, 90, of Albert Lea will take place at a later date in Lakeside Cemetery in Fairmont. There will be no memorial services or visitation.

Dorothy was called to her eternal rest on Thursday, April 20, 2017, at Thorne Crest Senior Living Community in Albert Lea. Kramer Family Funeral Home is assisting the family with arrangements. Messages of sympathy may be sent to the family online at www.kramerfuneralhome.com. 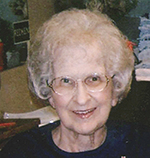 Dorothy Marie Clemensen was born July 3, 1926, in rural Ringsted, Iowa, the daughter of Gerdis and Minnie (Hansen) Clemensen. She received her education in Iowa and Minnesota. Dorothy was united in marriage to Dick Paluch. They worked at Toastmaster Products in Illinois. After her husband’s death, she moved to Thorne Crest Senior Living Community in Albert Lea in 1988. She was a member of Grace Lutheran Church in Albert Lea.

She is survived by her niece, Marsha (Gary) Williams, of Welcome; her nephew, Kevin (Raven) Eckmann, of Hanford, California; their families; and a host of extended family and friends.

Dorothy and her family would like to express thanks to friends and staff at Thorne Crest, St. Croix Hospice and Grace Lutheran Church for their friendship, care and support she received during the time she resided at Thorne Crest.