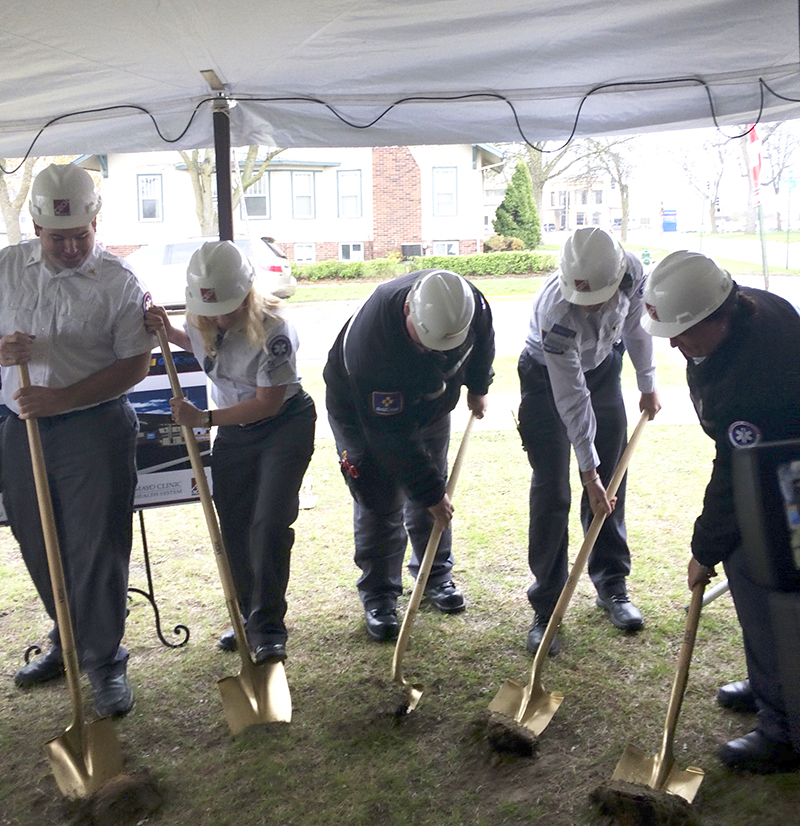 Gold Cross responders on Tuesday dig into the ground at the site of a future building on West Avenue in Albert Lea. - Sam Wilmes/Albert Lea Tribune

The planned 8,100-square foot facility will be at 109 West Ave., on the campus of Mayo Clinic Health System in Albert Lea near Central Park. The facility will house office and training space, crew quarters and ambulance space.

Trish Gathje, supervisor of operations at Albert Lea Gold Cross, described her connection with the hospital.

“It’s with great enthusiasm today that we are going to break ground on a new building,” she said.

Keltgen said assuming construction starts before May 8, completion and occupancy of the building should be completed around Oct. 1.

Keltgen said the state-of-the-art facility is expected to have a 45-year lifespan, support five ambulances and support up to 36 employees.

The Rev. John Mitchem of United Methodist Church gave an invocation and blessing.

“Anything that is done well, that is sustainable, is done together,” he said.

According to a press release, Mayo Clinic is making a substantial capital investment into its ambulance operations in the city by building the $2.2 million facility.

“The scale of the project represents Mayo Clinic’s ongoing commitment to the community and providing advanced life-support emergency care,” the press release states. “The new home for ambulance operations is the result of an extensive study of the rising number of requests for paramedic care and needs for the community. Gold Cross has outgrown the current facility, and the new location of the new space will be in close proximity to the hospital and more centrally located.”

Keltgen said the facility will consolidate ambulance services that are at four locations.

The press release states the new facility is designed to be energy efficient, will complement the neighborhood and is not expected to result in additional traffic or noise issues from emergency vehicles. The site for the building is owned by Mayo Clinic, and the facility will be privately funded.

“This project demonstrates Mayo Clinic and Gold Cross’ long-term commitment to Albert Lea as well as residents and visitors to the area who one day may need the care of a paramedic in an emergency situation,” Keltgen said in the release.

Albert Lea Director of Public Safety Dwaine Winkels discussed the number of lives saved by police officers and credited training by Gold Cross employees. He said the facility is needed.

“I love it, so thank you very much,” Winkels said.

Gold Cross has made changes to the planned facility since it was introduced. The changes were made after safety concerns were made by local residents, and requests for a more scenic building were made at an Albert Lea Planning Commission meeting in March. Additional bricks and revised garage doors have been added to plans to increase the facility’s aesthetics on the building’s east side. Light fixtures and brick with medallion work are planned on the south side of the facility.

Albert Lea-Freeborn County Chamber of Commerce Executive Director Randy Kehr said the facility will be a great addition to the community that will consolidate resources and increase services, safety and tax base in the community.

Neighborhood resident Pauline Johnson, who attended the ceremony, said she is excited about the new facility. She has lived in the neighborhood for 59 years and has had a family member whose life was saved by first responders.

“We welcome them with open arms,” she said. “My brother was one of the saves that they made, so, very excited to have them to be able to respond to the community so quickly from one spot.”

Johnson said she does not view noise or the nearby hospital as concerns.

“This was our choice to live in this area, and I’m really excited to welcome them here,” she said.