In Minnesota, strike on Syria finds support and concern 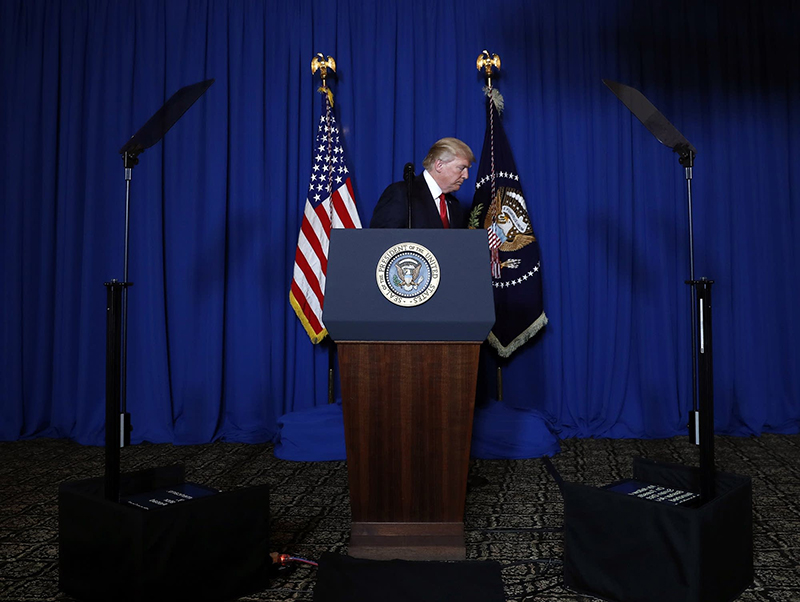 President Donald Trump walks from the podium after speaking at Mar-a-Lago in Palm Beach, Florida, on Thursday after the U.S. fired a barrage of cruise missiles into Syria in retaliation for this week’s gruesome chemical weapons attack against civilians. - Alex Brandon/MPR News via AP

Over coffee at Raphael’s bakery in downtown Bemidji, Steve Wilds pondered the overnight news that the United States had struck a Syrian airbase with cruise missiles to retaliate for that nation’s deadly gas attack against its own people.

Wilds said he never supported President Donald Trump politically, but added that he’s willing to let the situation in Syria play out.

“I think he’s unprepared, unsuited to be the president (but) not everything the guy’s gonna do is going to be wrong,” he said. “Obviously the Syrian government did a lot of bad things and needed some retribution against that. Whether or not what was done will be positive or negative remains to be seen.”

That sentiment could be found in stretches of Minnesota Friday. Conversations in the northwest and southeast found some Minnesotans who oppose Trump politically supporting his decision to strike but worried about what comes next.

“If Syria was doing the things they’re accused of doing, then absolutely we should be in there. Even if it’s not our business, someone has to do something about it,” said Weston White from Bemidji.

White, though, said he’s just not sure if he trusts what has been reported or if it’s fake news meant to scare the U.S. into another war.

“I haven’t been on WikiLeaks lately, but how much evidence do they have, whether or not the sarin attacks were by the Syrian government or not?” he said.

For some, there was no need for more detail.

“I think we should have been in there a long time ago, and we wouldn’t have to worry about being in Syria now,” said Doug Jones of Wadena. “That’s how I feel.”

In downtown Rochester, Andrea Beck saw the issue as more complex. Walking her two German shepherds, Beck said she’d support safe zones that some public officials in Washington, D.C., have discussed but that she’s not convinced the Trump administration has the right answers.

“Did something need to be done? Yes,” he said. “Am I concerned that this is going to go somehow horribly out of control and awry, and lead to an expansion of conflict throughout the world? Yeah. I’m very concerned about that.”

Winters said he worries that Trump’s response was based on an instinctual reaction and not a long-term strategy. Trump, he added, wasn’t clear on the campaign trail about how he would handle the conflict in Syria.

But Sue Rock, who was visiting Rochester from Arizona, said it’s appropriate for the U.S. to get involved, even if that means a prolonged intervention.

“When you’re killing your own people, I don’t think you should be in power,” she said. “If we’ve got to step up to the plate, so be it.”

Rock isn’t concerned that just a few days ago, Trump signaled he would not get involved in the Syrian conflict. She said it’s a good thing that his views on the situation evolved based on the latest attack.

“Life is ever-changing and I think our leaders have to be like that,” she added. “They have to be willing to change with what’s going on.”