In the face of adversity, the Tigers rise 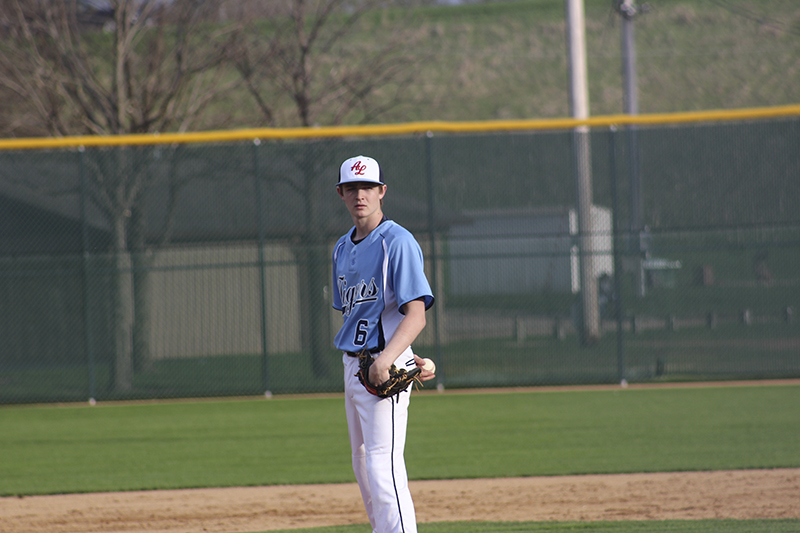 Albert Lea coach Sean Gaston said Ty Harms is just as important playing second base as he is coming out of the bullpen. “I view him as the ‘fire man,’” Gaston said. “(He is) the guy we can bring in to put out the fire and give us a chance to stay in the game.” - Jarrod Peterson/Albert Lea Tribune

After losing most of its starting roster to graduation and 28-year head coach Joe Sczublewski to retirement, the Albert Lea baseball team was expected to go through a rebuilding year of sorts in 2017.

With few starters returning, not many knew what to expect from the Tigers — except themselves.

After a lot of hard work in the offseason, a smooth transition of head coaches and high-energy practices, Albert Lea is off to a 4-3 record to start the season and, according to the Minneapolis Star Tribune, is ranked No. 13 in Class 3A.

When asked what has surprised him the most to start the season, head coach Sean Gaston said it was the offense.

“I have been pleasantly surprised by the strong offensive contributions we have gotten from so many players,” he said. “Early in the season, the bats always tend to trail behind. Outside of a few games, that has not been an issue.”

The Tigers have tallied 35 runs in their first seven games, and that even includes being shut out by Red Wing.

Nine different players have at least one RBI and 12 have scored one run or more.

Albert Lea already knocked off No. 2 Northfield and defeated a tough Hutchinson team in its opener.

Coming into the season, Albert Lea returned Alex Bledsoe, Ben Witham and Jake Bordewick as the only players with significant varsity experience.

That was something that worried Gaston a bit.

Cody Ball and Blake Simon have picked up the slack on the pitcher’s mound left by Jake Kilby’s exit.

When asked about who he thought has stepped up the most to start the season, Gaston said he has been pleased with the production of two players who are taking advantage of the opportunity they have earned.

“Goody has been a major force at the plate for us this year,” Gaston said. “He is a great athlete and has taken his hitting to another level. He made some adjustments to his swing in preseason workouts and it has translated to increased contact and power.”

Junior infielder Ty Harms, who hasn’t been as stellar at the plate (.250), has been a multi-faceted player for the Tigers and can play a variety of positions, including pitcher — where he has pitched the most innings on the team (12) and has a 2.92 ERA through four appearances.

“Ty has been a big boost for our team,” Gaston said. “We always knew he would do a good job in the middle of the field, but his work on the mound has carried us at times. (He) pitched as a freshman, but did not do much work as a sophomore. We talked before the season that he would need to be a guy out of the pen for us and he has taken to that role.”

Adjusting to a new coach can be tough on a team, especially when all the players on this year’s team grew up learning from and playing for Sczublewski.

But, Albert Lea senior catcher Zach Edwards said Gaston has stepped up to the plate and meant business since he took the helm.

“He has taken his new position as head coach with flying colors,” Edwards said. “He has energy and likes to have fun.” 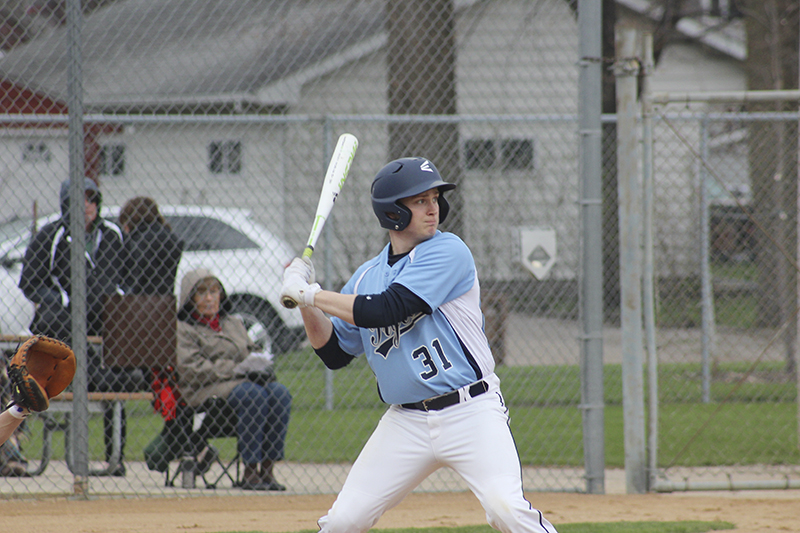 Albert Lea’s Ben Witham leads the Tigers with one home run and eight runs batted in on the season. The senior has been a mainstay in center field for the last few seasons. – Jarrod Peterson/Albert Lea Tribune

“He has a lot of energy, but he also brings new ideas to the table,” he said.

One thing that makes small-town baseball fun is the group of players.

Most of the players on the Tigers played on the same teams growing up and have been around one another outside of the game. Developing that bond and friendship grows and strengthens over time.

It reaches its pinnacle when players reach the varsity level. It’s where a team becomes a family.

“Most of the boys that are playing on this team have played together for quite a few years,” Bledsoe said. “We’re a family. We know each other’s strengths and weaknesses.”

Not wanting to let each other down comes into play when the game is on the line.

Take, for instance, when Albert Lea played Northfield at home this season.

After leading for much of the game, Northfield’s Hunter Koep blasted the second of his two three-run homers and Northfield eventually took the lead late in the game.

While all the momentum was gone, the Tigers didn’t quit. They battled until Ball delivered the game-winning hit to drive in Simon in the bottom of the seventh inning.

“It was a great team win,” said Witham, a senior outfielder who is batting .450 with one home run and eight RBI. “And it was a huge win. It was nothing but a team effort all the way through.”

“Timely hitting has been a key for our success so far,” he said. “I think what makes it so fun for us is we’re all best friends and we’ve all played together for a long time. We all root for each other.”

In the preview to the season, Gaston mentioned the word “energy.” A person doesn’t have to spend more than five minutes around this group to know they enjoy playing the game together.

“The reason I think this team has so much energy is that we all love playing the game with a passion,” Edwards said.

Baseball is a game of failure. Keeping chins up during a slump is the hardest thing to do, but it hasn’t seemed too difficult for the Tigers.

Albert Lea endured a two-game losing streak in which it scored just two runs and, according to Gaston, struck out too many times.

When he played baseball, Gaston said his biggest weakness was dealing with failure. He is now using that weakness and turning it into a strength for his players.

“With our players, we try very hard to help them understand that failure is just a moment, not a defining trait,” he said. “We push them to play with passion and energy, but channel that failure and move on.”

After falling to Austin and Red Wing, the Tigers rebounded to win three of their next four games.

“One thing I am pleased with so far is how far the team has come since our game against Austin,” Edwards said. “In that game, we didn’t do so hot. But we have grown so much and are playing with more of a killer instinct to win.”

As the Tigers head into the meat of their season, Gaston has highlighted two areas of improvement his team needs to make if it wants to continue having success.

The first is consistency.

“We are getting better, but we need to continue to improve our consistency,” he said. “We are still a high school baseball team, so that will always be an area of concern. We paraphrase Chuck Coll and tell the boys all the time, ‘Great teams are not great because they do the extraordinary, but because they do the ordinary things better than anyone else.’”

The second is throwing more strikes, which can alleviate a lot of problems.

“Our goal as pitchers is to either force weak contact early (in the count) or throw two strikes in the first three pitches,” Gaston said. “This will keep our pitch counts down, allow us to throw deeper into games, limit our freebies and force hitters into uncomfortable counts.”

Last season marked the third straight year in which Albert Lea won at least four games in the section playoffs. The Tigers came within one win of advancing to the state tournament in 2016, but fell to Northfield in the second game of a double-elimination tournament.

For Edwards, Bledsoe, Witham and Bordewick, as well as the whole team, the goal is simple: make it to state.

“The goal this year is to just keep working every day to win as many games as possible,” Witham said. “We want to win the section and take it as far as we can.”

Gaston likes the goals of his team, but he also has to be real with his players.

“We have been honest with the boys from the beginning,” Gaston said. “We can compete with anyone as long as we play together, we play with energy and we play with focus. We put together a tough schedule to test the boys throughout the season and get them ready for sections.”

Albert Lea suffered a 9-0 drubbing by Northfield in the section final last season.

On that day, the loss meant the Tigers’ season was over.

Today, it serves another purpose.

“We were one game away last year from going to state,” Bordewick said. “And that’s what motivates us to get there this year.” 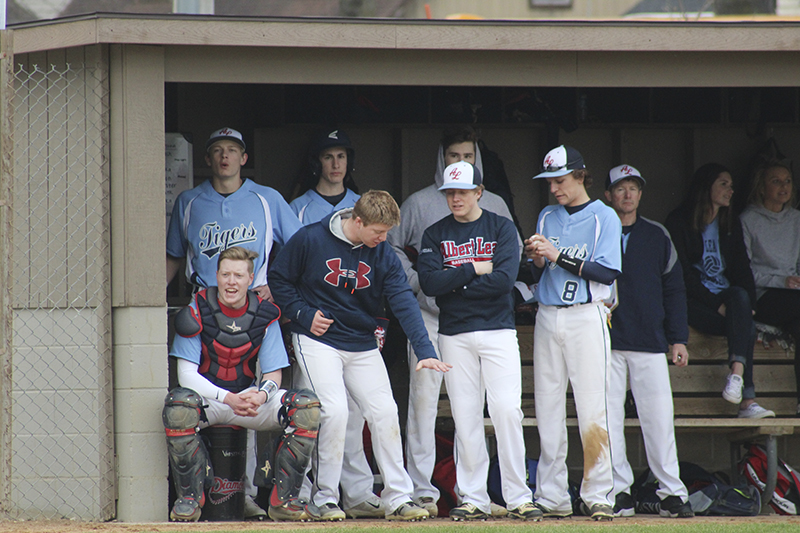 The Albert Lea baseball team is off to a 4-3 start to the season and ranked No. 13 in Class 3A. The Tigers’ biggest win came at home against Northfield on April 18. – Jarrod Peterson/Albert Lea Tribune