Jackie was born on Aug. 28, 1932, near Utica, South Dakota, the daughter of William and Ida (Weidenbach) Hauck and was raised on the homestead family farm. She received her education in Scotland, South Dakota, graduating in 1950 and then attended Yankton College, where she majored in education and music. 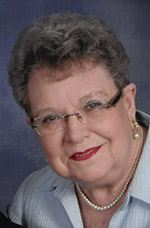 Jackie married her high school sweetheart, Richard Robinson, on June 17, 1951, in Yankton, South Dakota. While Dick attended Purdue University in Indiana, Jackie worked at Arvin Industries and the Horticulture Department at Purdue University.  They moved to Austin in 1954, where Jackie worked for Austin Public Schools and then at Austin Country Club — first as a secretary for five years and then as the club house manager for six years. While in this capacity she served as the regional director for the Club House Managers Association of Minnesota. In 1983, she became office manager for Four Seasons Travel and in 1987 she transferred to the Albert Lea office, where she worked as the general manager for five years. In 1992, Jackie opened Sterling Travel and was general manager until her retirement in 1998.

The Robinsons traveled extensively, visiting six continents and many areas of the United States as tour guides and for personal pleasure.  Jackie was an active member of Westminster Presbyterian Church and served as an elder and deacon, sang in the choir and was president of the Women of Westminster Presbyterian Church. She found great pleasure in hosting family gatherings and entertaining friends at dinner parties in their home.  She loved mystery novels, good movies and an up-to-date atlas.  She will be remembered as a loving wife and mother, respected by her peers and woman of faith.

She was preceded in death by her parents; infant daughter, Carla Ann; and a sister, Phyllis Jean.

Memorial services will be at 11 a.m. Monday at Westminster Presbyterian Church. The Revs. Mike Olmsted and Allison Cobb will officiate.  Interment will follow the service at Oakwood Cemetery. Visitation will be from 9:30 to 11 a.m. Monday at the church. Memorials should be directed to “Festival of the Nativity,” which will take place Dec. 1 and 2 at Westminster Presbyterian Church, or Austin Symphony.