A Mass of Christian Burial will be at 10:30 a.m. Tuesday at St. Casimir Catholic Church in Wells. The Revs. Eugene Stenzel and Andrew Vogel will officiate. Visitation will be from 4 to 7 p.m. Monday at Bruss-Heitner Funeral Home in Wells and will continue one hour prior to the service at the church on Tuesday. Interment will be at St. Casimir Cemetery in Wells. Bruss-Heitner Funeral Home in Wells is assisting the family. To leave an online condolence, visit www.brussheitner.com. 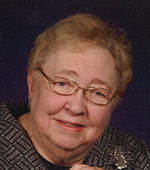 Janet Mae was born Aug. 15, 1935, in Walnut Lake Township, Faribault County, the daughter of William E. and G. Bernice (Dulas) Warmka. She attended Our Lady of Mount Carmel Catholic School through the eighth grade and graduated from Wells High School in 1953. After high school, she attended and graduated from beauty school. Janet was united in marriage to Clement Schultz on Oct. 6, 1956, at Our Lady of Mount Carmel Catholic Church in Easton. To this union, two sons were born and one daughter adopted in love. Janet was an excellent homemaker and lovingly raised her family. She loved to bake and dreamt of working in the Betty Crocker test kitchen. She had fun playing cards and going out with her many dear friends. Janet also enjoyed entertaining, always keeping her cupboards and freezer stocked, and ensuring nobody ever left her home hungry.

She was an active and faithful member of St. Casimir Church and School. She thoroughly enjoyed working with the children at St. Casimir Catholic School as a teacher aide for over 35 years, where she helped many, many children. Janet was a generous and faith-filled woman, who loved her children immensely. Janet was a wonderful grandmother, who loved and enjoyed her “little people” — her grandchildren, their spouses and her great-grandchildren.

Janet is survived by her children Craig (Janelle) Schultz of Wells, Brian “Buzzy” (Carol) Schultz of Wells and Leanne (Brian) Tukua of Freeborn; grandchildren Amanda (Martin) Carlson and their children Eli, Devrie and Kenneth of Good Thunder,  Katherine (Nathaniel) Walton and their children Noah, Grace, Selah and Titus of Bricelyn, Ashley (Christopher) Hotzler and their daughter, Kamdyn, of Fremont, Nebraska, Jennifer (Eric) Wendinger and their children, Carson, Aubrey and a baby on the way of Fairfax, Abbey Tukua of Freeborn, Sarah (Cole) Ramsley and their daughter, Maya, of Fairfax, Laura Schultz of Zumbro Falls and Andrew Schultz of Wells; brothers Warren (Ruth) Warmka of Lakeville and William C. (Sharon) Warmka of Tucson, Arizona; sisters Carol (Peter) Berg of Lake City and Charlotte Laxen of Winsted; brothers and sisters-in-law Norbert (Margaret) Schultz of New Richland, Francis (Angie) Schultz of Janesville, Sister Mary Florence, C.R. of Chicago, Dorothy Horvat of Lowry, Judy Warmka of Bloomington and Mary Lou Warmka of Cleveland; and many nieces, nephews and their families.