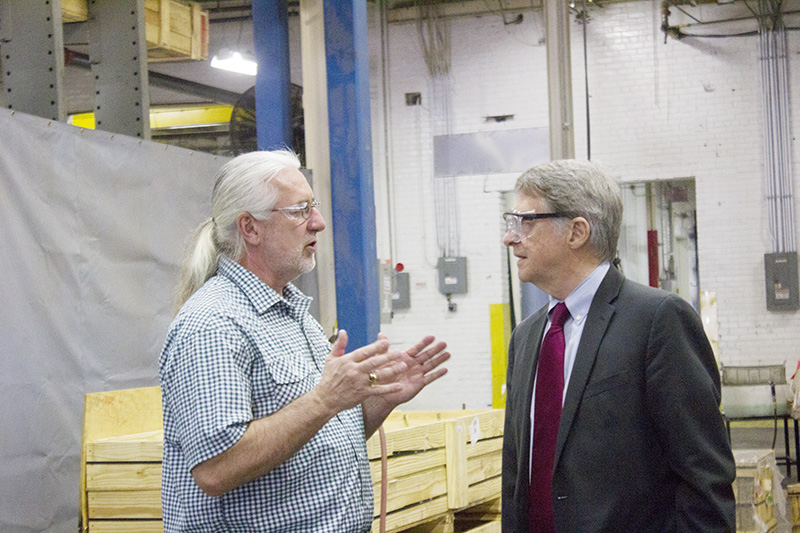 Lou-Rich Inc. was recognized by a state agency Monday for employee efforts to develop a healthy and safe workplace.

State workplace safety and health representatives from the Minnesota Department of Labor and Industry recognized the Lou-Rich facility at 505 W. Front St. as a Minnesota Safety and Health Achievement Recognition Program worksite during a visit.

A flag-raising ceremony was conducted, and state officials were provided a tour of the facility.

Department of Labor and Industry Commissioner Ken Peterson thanked Lou-Rich officials and employees for their work. He credited company culture for providing a safe workplace and said company values include caring about each other to ensure that no-one gets injured.

“It’s a very impressive record,” he said. “You all should be very proud of it. On behalf of the governor and our department and everybody else, thank you very much for your work.”

Lou-Rich officials have worked with Occupational Safety and Health Administration workplace safety consultation since 2005 to improve the health and safety of workers at the site.

The Lou-Rich site is one of 36 active such worksites in Minnesota. Lou-Rich Machine Tool Inc. was founded by Louis Larson and Richard Ackland in 1972 in Hayward. The organization acquired its Albert Lea facility and headquarters in 1989 and became employee-owned in 1992. The company’s name changed to Lou-Rich Inc. in 1993 and established Innovance Inc. as a holding company and Almco Inc. as a subsidiary in 2004. The assembly facility in Albert Lea opened in 2006.

Innovance has 381 employees in seven buildings. The Lou-Rich facility at 505 W. Front St. has 249 employees who work in four shifts.

“We’re an employee-owned company,” he said. “Like any company, your employees are your best asset. It’s our goal to make sure that every one of our employees goes home safe and injury-free to their family so they can enjoy their family. We’re really a big family here, and we just don’t want anyone to get hurt.”

“It’s employees’ ideas and such that developed over time that has made such a vast improvement for this program,” he said.

Innovance has worked with local firefighters, police officers and insurance agents and companies to ensure the company meets its No. 1 goal, Schroeder said — employee safety. He said no Innovance employee missed time in 2016 due to a work-related injury or was placed on worker’s restriction.

“This is a huge building,” he said. “It’s an older building. We’ve got a great group of people here — everybody looks out for one another. And this is just recognition for all of it.”