Lucille Nechanicky of Owatonna died Wednesday, March 29, 2017, at St. Lucas Care Center in Faribault. A Mass of Christian burial will be at 10:30 a.m. Tuesday at Sacred Heart Catholic Church in Owatonna. The Rev. John Sauer will officiate. Interment will take place at Holy Trinity Catholic Cemetery at Litomysl. Friends may greet the family from 4 to 7 p.m. Monday at Brick-Meger Funeral Home, 1603 Austin Road in Owatonna, and one hour before the time of the funeral liturgy on Tuesday. There will be a 3:45 pm parish rosary at the funeral home on Monday. 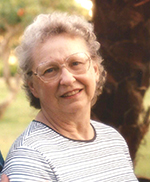 Lucille was born Aug. 14, 1925, in Owatonna, the daughter of Ervin and Andrea (Jacobsen) Linse, and was then later adopted by Harlan Buelow. Lucille graduated from Owatonna High School in 1945. On May 5, 1947, Lucille was united in marriage to John Nechanicky at Hyacinth Catholic Church in Owatonna. They remained married for 69 years. Lucille worked for Atlantic and Pacific Tea Co. in Owatonna, Lerberg’s in Ellendale and then accepted a job as the head cook at Ellendale School for 26 years, retiring in 1990. She continued to work part time for an additional 22 years. Lucille belonged to St. Aidan’s Catholic Church in Ellendale, where throughout the years she held the offices of president, vice president, secretary and treasurer of the church council.

She was preceded in death by her parents, one sister and one great-grandson.

Memorials for masses at Sacred Heart may be donated in honor of Lucille. To leave a condolence, go to www.brick-megerfuneralhome.com.