Margaret was born Aug. 23, 1920, in Mauston, Wisconsin, the daughter of Richard C. Kastner and Selma B. Hagen. She spent the first 15 years of her life in Mauston before moving to Kiester. She was united in marriage to Elmer Simonson on Aug. 11, 1939. To this union four children were born. Margaret worked as a United States Department of Agriculture meat inspector for many years at Stamper’s Meat Processing in Wells, Land O’ Lakes and Wilson & Co. in Albert Lea. Later she worked as a news reporter for the Kiester Courier Sentinel. 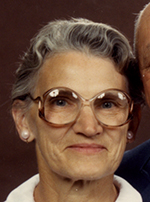 She was a member of Senior Citizens and a past president. She enjoyed playing cards, baking, making quilts, gardening and canning. Her great enjoyment was visits from her many grandchildren and friends. She collected salt and pepper shakers.

She was preceded in death by her parents; husband, Elmer, in 1998; sisters Vera and Doris; brothers Willard and Carl; infant grandchildren Caren in 1962, Rita in 1969 and Chad in 1974.