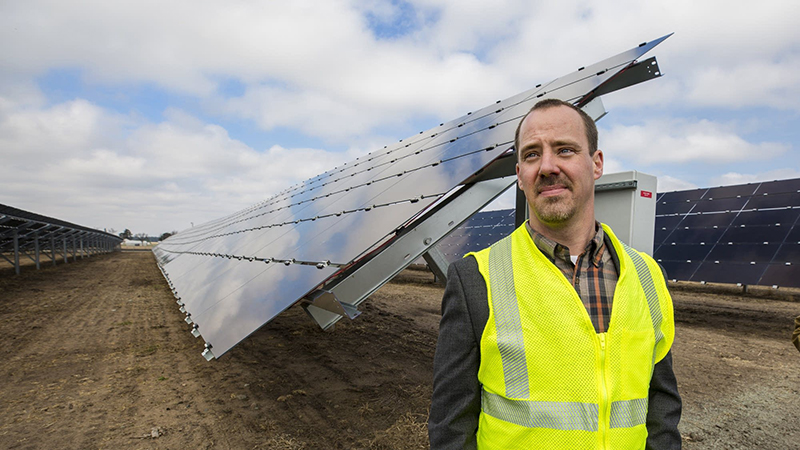 It seemed like a good omen when the sun managed to make a late appearance on Thursday as elected officials and business and military leaders gathered at Camp Ripley to celebrate the completion of a massive new 10-megawatt solar array, a joint project between the Minnesota National Guard and Duluth-based Minnesota Power.

“This is one of the first fields that are built on state land, and it has set the precedent for the amount of size, amount of opportunity that there is for developing clean energy resources,” said Staff Sgt. Anthony Housey, from Camp Ripley’s public affairs office.

Housey said the project would help move the camp toward its goal of energy independence.

The solar panels sprawl over an area the size of about 65 football fields on the east side of Camp Ripley, about 10 miles north of Little Falls in central Minnesota.

Camp Ripley is an ideal place for a solar farm because of the wide-open available space, according to Al Hodnik, president and CEO of Allete, the parent company of Minnesota Power.

“Large-scale or community solar, the bigger solar like that is the more efficient solar,” he said. “So at the end of the day, if you can build them bigger, you get much more economies of scale.”

Hodnik said the solar farm will serve all Minnesota Power’s customers. But all the electricity the array produces can be directed to the National Guard in an emergency like a major storm or terrorist attack.

“Most days, it’s going to all of us. On the days they really need it during a crisis, it comes to the Guard exclusively,” he said.

The $25 million project also will help Minnesota Power achieve state solar standards. Major utilities must generate at least 1.5 percent of their electricity from the sun by 2020.

The solar farm will produce enough energy to power about 2,000 homes.

Most of that electricity will be returned to the grid for use by Minnesota Power customers unless it’s needed by the camp.

Minnesota Power already gets more than 30 percent of its electricity from renewables. Hodnik said the Camp Ripley solar farm provides the utility with a more diverse mix of energy sources.

“We have wind, we have solar, we have biomass, we have hydro. We’re not trying to put all of our renewable eggs in one basket,” he said.

Lt. Gov. Tina Smith said the Camp Ripley solar project is an example of what the state can accomplish with clean energy.

“This renewable energy is affordable. It is reliable. It is contributing to the energy security of Camp Ripley, and it is clean,” she said. “All of those things come together I think to contribute to the economic strength of the state.”

The impact could reach beyond Minnesota. Officials said the Camp Ripley project could become a national model as the Department of Defense looks use more renewable energy on military bases around the U.S.