Michael Lee Kropp, 49, died peacefully Sunday, April 2, 2017, at home surrounded by his wife, children and parents. Michael’s adventure on this earth has ended and he is now experiencing his greatest adventure ever.

Michael was born Feb. 1, 1968, in Albert Lea to Don and Judy (Clark) Kropp. He was the first of three sons. Michael spent his growing up years in Albert Lea. He participated in track and field, competing in the 100-meter dash at the state meet, band and church choir. He was baptized and confirmed in the Lutheran faith in Albert Lea and volunteered as a Sunday school teacher. Mike graduated from Albert Lea High School in 1986. He spent several summers working as a counselor at the Albert Lea summer science program at Itasca State Park.

After high school Mike attended Winona State University. He worked as a resident assistant in the residence halls, was a member of the track and field team, was involved in Koinonia — a musical campus ministry group — and met his future bride. Michael graduated from Wisconsin State University in 1990 with a Bachelor of Science degree, majoring in paralegal studies. 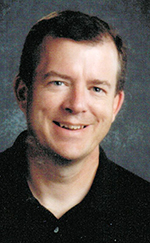 Michael moved to the Twin Cities and worked as a paralegal, first as an intern at Hauer & Fargione and then at Foster, Waldeck, Lind & Gries for five years. While working as a full-time paralegal, Michael decided that teaching just might be his calling, so he took weekend college classes at Augsburg College and earned his secondary social studies education licensure in 1995.

In 1992 Michael married Kristi Swanson, originally from Ivanhoe. They were blessed with two amazing children, Connor Lee — who is a senior at Wabasha-Kellogg — and Rachel JoyceAnn, a fifth-grader. These two gave Michael his favorite job: being a dad.

Michael’s decision to become an educator was one of the best choices he ever made. Michael began his teaching career with a long-term subbing job in Windom in the fall of 1995. He soon found out the classroom was exactly where he belonged. His first permanent teaching job began in January 1996 at Glenville-Emmons High School, where he taught for eight years. Mike and Kristi lived in nearby Albert Lea, where they bought their first house and where Mike became quite the willing home remodel “do-it-yourselfer.” This is where Connor was born and where they immersed themselves in both the Albert Lea and Glenville communities. Life was good.

They found out life could be good in other places, as well, when Michael accepted a teaching position at Wabasha-Kellogg High School in 2003. Michael taught high school social studies at W-K for 13 years. He also devoted much time and energy to building the W-K track and field team as its head coach for 13 years.

He was an active member of Faith Lutheran Church, where he mentored confirmation students, participated in Lenten skits and served on church council, the worship committee and the endowment committee. He served on the board of the Wabasha Public Library. He also worked on the home and garden show committee, as well as local fun run committees. Ironically, he also worked on the committee for the very first American Cancer Society Relay for Life in Freeborn County way back in 2003.

In April of 2010, Michael was diagnosed with brain cancer — Grade 4 oligoastrocytoma. He was blessed with a surprising amount of normalcy and embraced life and all it had to offer during the seven years since then with his new mantra, “Keep living life one adventure at a time!”  He was in his classroom as much as possible, where he strived to make connections, be a positive force and encourage his students to welcome change and challenge, to think outside the box and to solve problems. Michael was unable to return to his beloved teaching career this past fall. Since that time he was cared for with much love by his wife and parents. He and his family have been blessed beyond measure by the steadfast support of family, friends and community.

He is survived by his wife, Kristi; children Connor and Rachel of Wabasha; parents Don and Judy Kropp of Albert Lea; brothers Jeff (Shari) Kropp of Owatonna and Bill (Heather) Kropp of Stewartville; nieces and nephews; aunts and uncles; his in-laws Ken and Margaret Swanson of Ivanhoe; and Kristi’s extended family, who couldn’t have loved him more if birth rather than marriage had brought them together. Mike will also be missed by many dear friends, fellow staff members and students.

A service to celebrate his life will be at 11 a.m. Saturday at Faith Lutheran Church in Wabasha. The Rev. David Knox will officiate. Interment will take place at 4 p.m. Sunday at Graceland Cemetery in Albert Lea. The Rev. John Holt will officiate. Family and friends may call from 4 to 8 p.m. Friday at Faith Lutheran Church. A time of sharing remembrances will commence at 8 p.m. The family prefers memorials.

Abbott Funeral Home of Wabasha is in charge of arrangements.