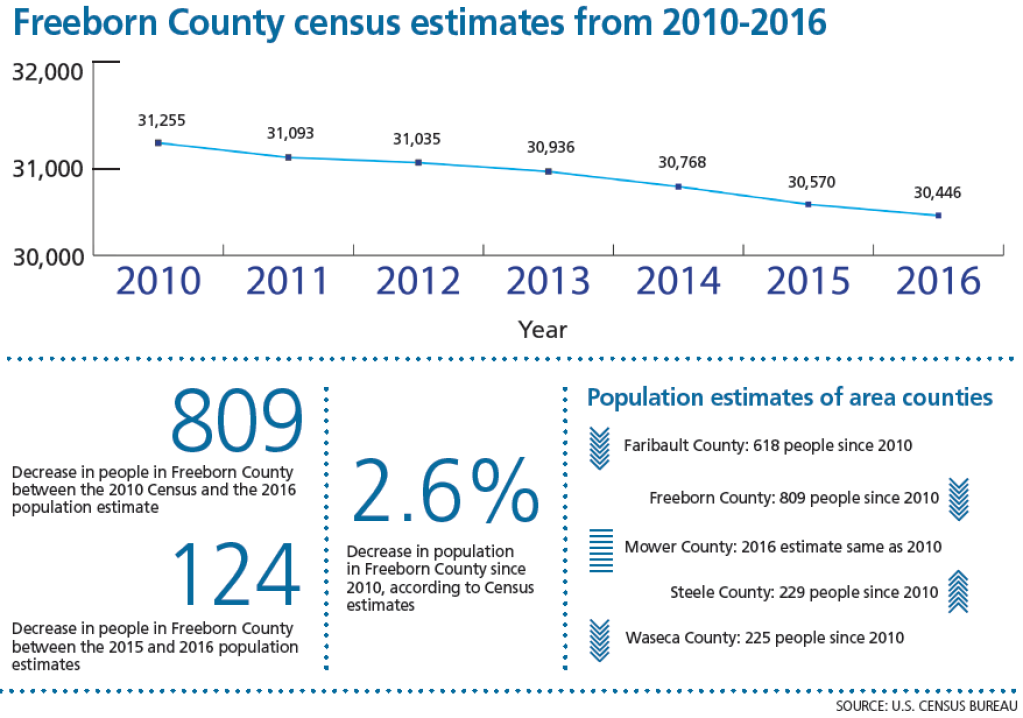 Officials say there are signs data will soon turn around

Freeborn County’s population decreased by a little more than 120 people from 2015 to 2016, according to estimates released last month from the U.S. Census Bureau.

Albert Lea City Manager Chad Adams said he has studied population data from the State Demographer’s Office, and though the state numbers also show a slight decrease for the Albert Lea population in recent years, he has reason to believe that those numbers may soon turn around. He said the number of households within the city is increasing — in 2013, there were 7,813 households in the city; in 2015 that number had grown to 7,824 with essentially the same household size.

“I believe we are turning around the population numbers, but it does take a couple of years to be reflected in state or federal data,” Adams said.

Seeing the increases in households and the units added and occupied at Wedgwood Cove Townhouse and St. John’s on Fountain Lake, he said he thinks the State Demographer’s Office will show population increases for the city either in its data released this July or next. Vacancy rates also continue to be low, according to his discussions with local Realtors, renters and the Albert Lea Housing and Redevelopment Authority.

Albert Lea Area Schools Superintendent Mike Funk said though he is disappointed to see Freeborn County’s population continue to decline in the census estimates, he hopes the community’s commitment to economic growth programs — such as tax abatement and tax increment financing — will soon pay off.

He said as a school district, the teachers, administrators and support staff work diligently to promote “an excellent education system” for the community. The efforts are paying off as there is continued growth in the school district.

“The district’s continued population growth in a community that is declining is a positive indicator for Albert Lea Area Schools as we strive to continuously improve,” Funk said. “If the community can secure more economic development, we have a great school system ready to serve more families.”

Albert Lea-Freeborn County Chamber of Commerce Executive Director Randy Kehr said he thinks one of the focuses needs to be on workforce housing for various incomes.

Outside of Freeborn County

Many of the counties in south central Minnesota have seen similar declines in their population since 2010, including Faribault and Waseca counties. Though Mower County’s population has varied each year, the 2016 number was even with the 2010 data. Steele County has been the only nearby county to see an increase in estimated population of about 229 people over the last six years.