A memorial service for Robert Wayne Sherman, 91, of Albert Lea will be at 2 p.m. April 29 at Salem Lutheran Church. The Rev. Elizabeth Endicott will officiate. Visitation will be one hour prior to the service at the church. Coffee, cake and ice cream with fellowship will take place after the service in the church gathering room. Online condolences are welcome at JAL55987@aol.com. The funeral had to be rescheduled from an earlier date due to adverse weather conditions.

Robert “Bob” died Wednesday, Feb. 1, 2017, surrounded by family at his residence in Osseo. It was peaceful, quiet and filled with the dignity his life deserved.

Bob was born and raised in northern Minnesota — Aitkin and Palisade — on the family farm. He never tired of stories about milking cows by hand, feeding horses before his own dinner, the Great Depression and its hardships, and his love of history. He served in the military, first in the Coast Guard during World War II and then in the Navy for the Korean War. 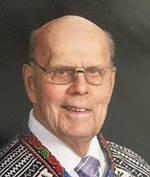 He married Agnes Olson on Feb. 26, 1949. Together they moved to Albert Lea, where they raised their family.

Bob first worked in the insurance business in Albert Lea, but eventually his love of learning overcame everything. He went back to school and earned his graduate degrees in history and became a certified special education teacher. With a new career course, Bob began his next career as the work study coordinator at the Decorah, Iowa, field office of Keystone Area Education Agency. Bob received the Outstanding Job Placement Person Award for the state of Iowa in 1979. He retired there and then became a faculty member in the history department at Waldorf College in Forest City. Bob was awarded the Holmen Award while at Waldorf College for his role in teaching history. After many years, Bob successfully retired from Waldorf after enriching students with his love of history, the many chaperoned trips to Europe and his summer of teaching at Oxford University in Cambridge, England. He helped discover relatives in Germany and Norway and was an active member of the Sons of Norway.

The other interests and loves of his life were gardening, fishing, cooking and talking politics. There are too many people to count who enjoyed the bounty of the Sherman garden. Whether it was pouring over the seed catalogs in January, doing gardening tours in the summer or delivering produce with a wagon up and down the neighborhood to friends and anyone who could appreciate a juicy, ripe tomato — Bob enjoyed his garden. Bob and Agnes bought the family farm on Long Lake in Aitkin and it is still a source of family fun, fishing and gardening. Politics were of the liberal variety. His cooking included every pot in the kitchen and a promise to do the dishes right after he took an afternoon nap.

Bob was a lifelong member of Salem Lutheran Church and his faith in family and his love for Agnes made his life valued. He will be missed.

Robert was preceded in death by his wife of 65 years, Agnes; brother, Vinton Sherman; sister, Fern Pray; and half-sisters Frances and Cecelia.

Memorials are preferred to Ecumenical Food Pantry at First Presbyterian Church or the Salvation Army food shelf in Albert Lea.

Marcella June Clausen, 94, of Albert Lea and Faribault went home to be with the Lord on Monday, April 17,... read more