1958, in North Dakota, but lived most of his life in Albert Lea. He attended Albert Lea High School and graduated with the class of 1977. He attended ALTEC and was certified as a boiler operator. He worked for Albert Lea Veterinary Clinic and then for a local food industry business.

Rob loved horses when he was young, but then decided he wanted to hunt. He bought his first springer spaniel at age 12, and had never been without one since. Rob loved to hunt and fish, and was a talented watercolor artist and woodworker. He loved to go picking at yard sales. Rob was an avid reader and a Civil War enthusiast. Permanent back injuries made enjoying his hobbies a challenge, but he always thrived best when he was able to function in the great outdoors. He enjoyed his years fishing on Lake Lida, his years hunting in Carpenter, South Dakota, and the very special friends in both places. He considered his friends in South Dakota as his family, and greatly looked forward to time spent with them each year. His family extends many thanks to the Glanzer family for their generous hospitality and love. 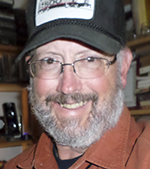 Rob loved to shoot skeet, and was a longtime member of Oak Grove Gun Club. He was a lifelong National Rifle Association member, and gave generously to Toys for Tots and Pheasants Forever.

Four years ago Rob met the love of his life, and his horizons expanded. Besides becoming well acquainted with his new second home of Wisconsin, he traveled to 17 new states, major Civil War battlegrounds and three coasts, and made many new friends along the way. He added camping to his list of favorite things to do.

He was loved and will be missed by so many friends and family members, old and new.

He was preceded in death by his parents and his brother, Will Sorlie.

He is survived by his fiancee, Patty Lillesand, of Verona, Wisconsin; her children and grandchildren; two nieces, Kaleigh (Matt) Carlson of North Carolina, soon to be Albert Lea again, and Tracy Sorlie and family of Albert Lea; two great-nephews, Braylon and Canaan; dear cousins and other relatives; very special friends; and two springer spaniels.

In lieu of flowers, the family suggests donations be made to Oak Grove Gun Club at 75660 250th St., Albert Lea, MN 56007; or Pheasants Forever at www.pheasantsforever.org.