Sandra Lea Wagaman was called to heaven as an Irish angel back home on Thursday, March 30, 2017. Sandra has moved on to fulfill her promise to her family to watch over, guide and protect them forever.  She was a gift blessed to Ernest Allen and Betty Clark on Feb. 6, 1943.

She married Carl Wagaman on Aug. 28, 1965. Sandy was an accomplished artist and poet who touched many souls throughout her life. She gave all and asked for little. 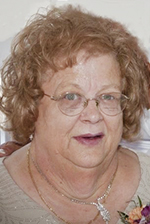 She leaves behind husband, Carl Wagaman, of 51 years; sister, Sharon, and Jim Andrews; two sons, Steve and Mary Wagaman, Scott and Angie Wagaman, and two daughters, Sherrie and Jassen Hoffmann and Shauna and Matt Christiansen; 11 grandchildren, Jon and Marisa Wagaman, Cody and Cory Wagaman, Ariel and Alex Christensen, Jadden, Jarren and Kallen Hoffmann, and Walter and Emmit Christiansen; and many nieces, nephews, other relatives and friends.

She was preceded in death by her parents and two brothers, Michael and Keith Clark.

A memorial service will be at 11 a.m. Tuesday at Worlein Funeral Services in Blooming Prairie and will be facilitated by the Rev. Lindsay Stolen of Red Oak Grove Lutheran Church. Visitation will be one hour prior to the service at Worlein. Burial will be at a later date. Memorials are to be given to the University of Minnesota Raptor Center in St. Paul.