Sarah was born June 29, 1938, in Albert Lea to John and Mary (Markey) Hubbard. She attended country grade school and graduated from high school in Wells.

Sarah worked at a variety store in Wells for three years before attending cosmetology school in Austin. She then worked for several years as a manager.

Sarah was united in marriage to Phil Hatten in 1960 at Queen of Angels Catholic Church in Austin. In 1963 the couple moved to Fulda, where Sarah worked at a variety store for nine years, and in 1973 they moved to Pipestone where she was a homemaker for four years. Phil and Sarah then moved to Black River Falls where they owned a hardware store for three years while Sarah was a homemaker. In 1984 they moved to Brownsdale, where they owned 3H Lumber for 21 years until their retirement in 2004. It was at this time Phil and Sarah became involved in the American Red Cross just in time for the 100-year flood. They were active until 2016. 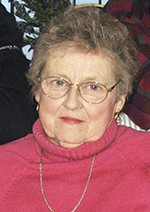 Sarah was a loving daughter, sister, wife, mother, grandmother and friend who placed God, family, friendship and community needs first. Sarah was a member of Our Lady of Loretto Catholic Church in Brownsdale and Queen of Angels Catholic Church in Austin. She was involved in the WCCW, church functions at five locations, civic and community functions at three locations, and 4H for 15 years. Sarah enjoyed any craft project, sewing, painting, fishing and traveling.

A funeral Mass will be celebrated at 10:30 a.m. Friday at Queen of Angels Catholic Church with the Rev. Raul Silva officiating. There will be a 4 p.m. CCW rosary and a 6:30 p.m. wake service on Thursday at Mayer Funeral Home, where friends may call from 4 to 7 p.m. There will be visitation one hour before the service at the church on Friday. Interment will be in Greenwood Cemetery in Brownsdale, followed by lunch and fellowship at Queen of Angels.

In lieu of flowers, the family requests memorials to the American Heart Association at donatenow.heart.org. Condolences may be left online at www.mayerfh.com.