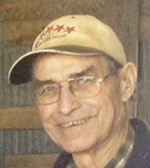 Memorial services will be at 11 a.m. April 22 at Salem Lutheran Church, 401 S. Lake St., Lake Mills. The Rev. Joel Guttormson will officiate. Visitation will be 9:30 a.m. until the time of the service at the church. Inurnment will take place at Salem Memorial Cemetery, in Lake Mills, with military honors performed by Lake Mills Otto/Chose American Legion Post No. 235. Services are being trusted to Mittelstadt Funeral Home, 902 E. Main St. in Lake Mills.

Stanley Sherman Stover was born April 21, 1933, in Ashton, South Dakota, the son of Grover Cleveland and Genevieve (Gardalen) Stover.  He graduated from Thompson High School in 1951. He was a four-sport athlete and won the contest for naming the new baseball diamond giving it the name Cubs Field. He later attended Iowa State University.

He served his country in the United States Army during the Korean War.

On Jan. 17, 1959, he was united in marriage to Judy Johnson at United Methodist Church in Wells. Together, they farmed and raised their family in the Leland, Iowa, area.

After retiring from farming, Stanley worked for several years at Metal Culverts in Albert Lea as a welder. He was an active member of Salem Lutheran Church, Lake Mills Lions Club, Leland Veterans of Foreign Wars, Winnebago County Agricultural Stabilization and Conservation Service, Lake Mills Elevator Board and was a 4-H leader. He enjoyed many fishing trips, flying with his son, Randy, and visiting with his coffee buddies.