Stephanie Jean Gunderson was born Jan. 6, 1952, in Austin, the daughter of Narv and Natalie (Kendall) Gunderson. She attended St. Augustine Catholic Elementary School and graduated from Austin High School in 1970. Stephanie continued her education at Austin Area Vocational Technical Institute, where she studied cosmetology. She later attended Riverland Community College, where she received her licensed practical nurse licensure in 1992 and went on to become a registered nurse. Stephanie married Steve Wangen and together they had one daughter, Shelly. Her later marriage to Steve Bartholomew brought her two sons, Matthew and Jared. 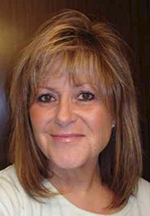 Stephanie had a zest for life unlike anyone. She enjoyed traveling, sightseeing, attending concerts and spending time with friends — especially if it meant doing it all from the seat of her Harley. Stephanie took great pride in her work at various nursing homes, and residents and their families were very fond of her. She enjoyed working in her garden, home improvements, swimming in her pool and relaxing on her deck if she actually sat down long enough to relax. Stephanie’s family meant the world to her, especially her grandchildren.

Stephanie was preceded in death by her parents and her sister, Caroline Stiehl.

A Mass of Christian burial will be at 11 a.m. Monday at St. Augustine Catholic Church. The Rev.  James Steffes will officiate. Visitation will be from 2 to 5 p.m. today at Worlein Funeral Home in Austin, and one hour prior to the service at the church. Worlein Funeral Home of Austin is assisting the family with arrangements. Condolences may be expressed to the family online at www.worlein.com.