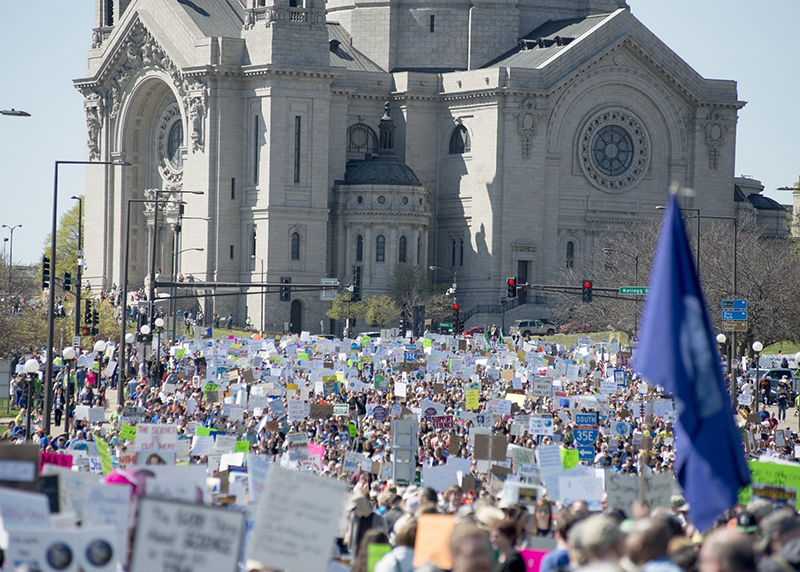 With the Cathedral of St. Paul visible in the background, marchers head toward the State Capitol in St. Paul during the March for Science on Saturday. - Matthew Hintz/For MPR News

ST. PAUL — Thousands of people marched in St. Paul Saturday afternoon as part of the March for Science Minnesota. St. Paul police estimated at least 10,000 people participated. Demonstrators marched from the Cathedral of St. Paul to the Capitol, chanting and singing along the route.

Mike Wolf from Golden Valley was one of them. He’s a scientist who works for a medical device company and said he was excited to be surrounded by so many others in his field.

“I love being on the train,” said Wolf. “I was around a bunch of virologists from the cancer center, and there’s a bunch of nurses nearby and the people from dental research. So it’s wonderful being surrounded by scientists.”

Organizers portrayed the march as political but not partisan, promoting the understanding of science as well as defending it from various attacks, including proposed U.S. government budget cuts under President Donald Trump, such as a 20 percent slice of the National Institute of Health.

Mike Hvidsten of St. Paul teaches college math and said he relies on research grants from the National Science Foundation. He said he marched to support ongoing scientific research.

“We need factual based decisions being made and scientific input into decisions that are being made and not be afraid of science and think it’s some kind of strange thing,” Hvidsten said. “It’s what everything is built on.”

Earlier on Saturday, younger demonstrators gathered near the Science Museum of Minnesota for the Kids Climate March.

Spencer Snyder from Minneapolis was there with his family.

“I feel that climate change is important and I want to make a better future for not only me, but every single kid here,” Snyder said. “We need to do what we’re doing right now. We can’t just have people driving by, saying ‘hi,’ honking. We need to act now and protest.”

Across the country, hundreds of science marches were scheduled to take place. In Minnesota, a total of 13 marches were planned, including in Bemidji, Alexandria and New Ulm.