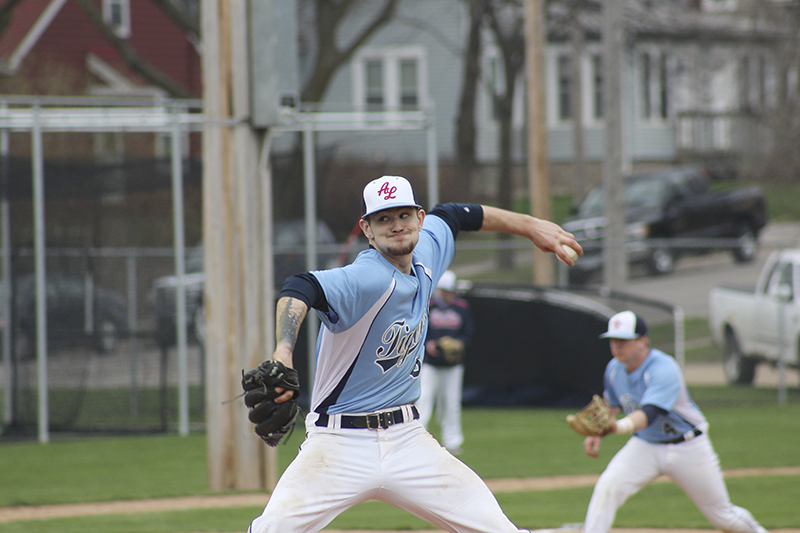 Albert Lea pitcher Blake Simon delivers a pitch in the second inning against Owatonna in Thursday’s home opener. Simon picked up the win. He pitched five innings and allowed one hit and no runs. - Jarrod Peterson/Albert Lea Tribune

The Albert Lea baseball team had its home opener against Owatonna on Thursday evening.

Coming in on a two-game slide, including being shut out against Red Wing on Tuesday, the Tigers were looking to get back to the .500 mark

Starting pitcher Blake Simon did his part in helping Albert Lea earn its second win of the season.

“It was great to get home, get on Hayek Field and play in front of our fans,” Tigers coach Sean Gaston said. “I think our boys fed off the excitement and were really fired up today.”

Simon seemed to carry that fire inside of him, as he pitched five innings and surrendered just one hit in a 5-1 victory for the Tigers.

“(Blake) was terrific,” Gaston said. “All I asked of him was to go out, compete and throw 75 pitches. He did that and more.”

Simon got early run support from his teammates.

After being held scoreless in Red Wing, Albert Lea got the bats cracking in the first inning against Owatonna pitcher Jacob Gauthier. 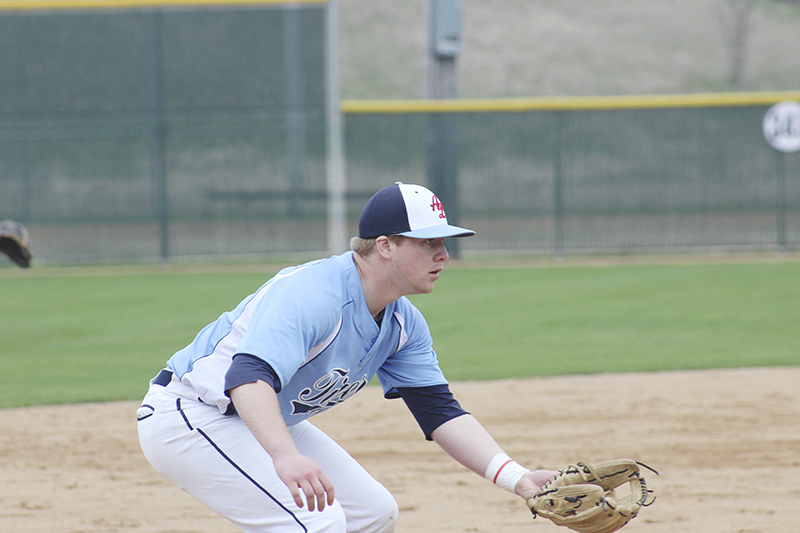 Simon singled to start the game, but was picked off a few pitches later for the first out.

Ben Witham followed with a walk, then first baseman Cody Ball hit a sharp single up the middle.

With two on and one out, catcher Zach Edwards smacked a first-pitch RBI single to center.

Witham would come around from second to score.

Alex Goodmanson would deliver the biggest blow of the first inning when he got hold of a Gauthier pitch and banged it into the left field gap.

Ball and pinch-runner Carter Simon came around to score, and Goodmanson tried to stretch the double into a triple, but his head-first dive was too little too late as he was thrown out.

That would be the extent of the scoring for the Tigers until Jack Buendorf delivered an RBI single that scored Ball in the third inning.

Albert Lea would add another run in the fourth inning when Witham shot an RBI single to center that scored Logan Stadheim.

On the mound, Simon kept Owatonna’s offense, which had scored eight runs in two games, grounded. The only hit he would give up came in the first inning.

Ty Harms relieved Simon in the sixth inning and gave up three hits, including an RBI single from Owatonna’s Ben Staska.

Harms would settle down to retire the side, and then got three quick outs in the seventh inning, including a double play to end the game.

While the bats came alive — 11 hits — it was Simon’s start that had Gaston excited.

“If we can get starts like that from him and combine it with the start we got from (Cody Ball) on Tuesday, we can be competitive in every game we play this year.”

The victory moves Albert Lea to 2-2 on the season.

“This was a great way to end the week,” Gaston said. “We have a big game coming up against Northfield next week. For us, we need to match the intensity and focus we had tonight next week in order to maximize the opportunities in front of us.”