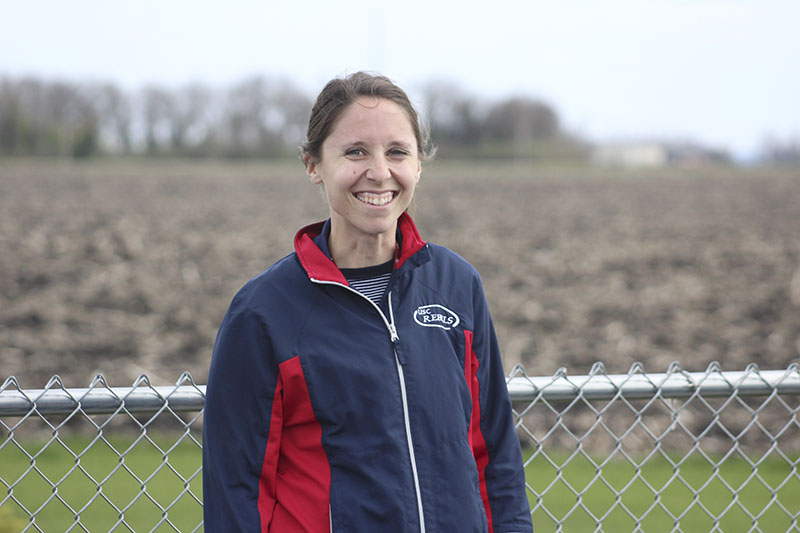 According to runningusa.org, over 16 million people across the United States compete in running events every year.

Whether it’s a 5k, 10k, half marathon or full marathon, millions of runners lace up their shoes to run for a new personal record, raise money for a good cause or as a means to stay in shape a little longer.

For Rita Augustine, running has been a big thing in her life since she was in sixth grade.

How she got started in it was unusual. 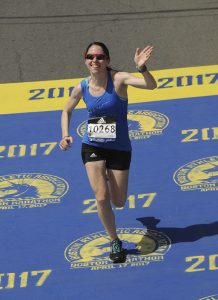 Rita Augustine started running marathons in 2015, and last week completed the Boston Marathon, the biggest marathon in the United States, with a time of 3:13.25. Provided

“I was in reading class in sixth grade, and we had a paraprofessional sitting in the back of the class,” she said. “One day, she was telling me about how her daughter ran cross country. She poked me on the shoulder and asked, ‘What are you doing in the fall?’ That was the moment.”

Augustine, of Wells, also played basketball up until high school, but decided to focus her time and energy on running.

“At the end of the basketball season, the coaches would audit you and grade you on a scale, detailing your strengths and weaknesses,” she said. “The only category in which I got a 5 in was hustle.”

She grew up in Minnesota Lake and attended Maple River High School, where she excelled in cross country and track and field.

She would use her hustle and dedication to become a good enough runner in high school that when she graduated in 2009, she was able to run for Northern Michigan University, in the Upper Peninsula in Marquette, Michigan, which was a Division II school at the time. It has since made the leap to the Division I level.

Augustine has always looked at running as a way to recharge and refuel.

“It’s really nice to go out and run in your surroundings,” she said. “Going to school in the UP, it was probably some of the best trail running I have ever experienced. It’s also a great way to stay active and make your jeans fit a little longer.”

While it’s a given that competing in high school and college are two different levels of competition, Augustine said she loved that part about it the most.

“It was a bonding experience to run with your team in college,” she said. “In high school, my coach would say, ‘Rita go run with the boys.’ In college, there was a lot more competition. I had to bust my butt just to be the seventh runner. I viewed the competition as a good thing.”

Her hard work helped her become a two-year captain for the Wildcats and she was also on the track and field team, where she excelled in the longer runs.

Upon graduating from college, Augustine moved closer to home and is now an English teacher at United South Central High School. She is also the head coach for high school cross country and the head coach for middle school track and field.

She started running marathons in 2015, and last week completed the Boston Marathon, the biggest marathon in the United States, with a time of 3:13.25. 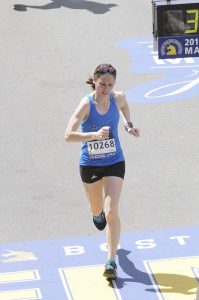 Rita Augstine said the number of people who ran in the marathon outnumbered the population of Faribault County. Provided

She said she was glad to be done with the Boston Marathon immediately after the race, but she said it was cool to be a part of something bigger.

“Boston is a really unique place,” she said. “Over 99 countries were represented and people of all shapes, sizes and backgrounds ran in that race. The number of people who ran in the marathon outnumber the population of Faribault County. That’s just crazy.”

Augustine had run two marathons prior to the Boston Marathon.

Her first marathon was in 2015 in Missoula, Montana, with a former teammate who had moved there for a job. She also ran a marathon last Labor Day in Marquette.

She had planned to run Boston in 2016, but Jared, her husband, had a sister who got married that same month.

“I had qualified for Boston, but then my husband’s sister got married and I was like ‘Now I have to requalify.’ But family comes first,” she said.

In her free time, which she admits she doesn’t have too much of, Augustine likes to camp, hike, visit Lake Superior and the Upper Peninsula, experiment with a new recipe, spend time with friends and family and take her dog, Trigger, for rides down gravel roads.

Augustine prides herself on taking risks and challenging herself.

She enjoys the chase. In her third year of teaching and coaching at USC, she said she still enjoys the daily challenges of being a teacher and coach.

“It’s been such a treat,” she said. “The hardest thing in college was finding that perfect balance between student and athlete. As a coach at a small school, it’s kind of the same thing. Finding ways to make your sport stand out amongst other sports is one challenge and getting kids interested is another. I always ask myself, ‘How can I make running appealing for future athletes at USC?’”

Augustine said she hasn’t decided when or where her next marathon will be, but she said going to Boston opened her eyes.

“Being there, I realized how diverse our country is,” she said. “I know a lot of people who have ran in the race before. But being there is something different. It was really inspirational.”