An Albert Lea man who allegedly injured his 4-year-old daughter in March was charged with a felony last week.

Court documents state Tafoya was charged after his daughter was taken to the emergency room at Mayo Clinic Health System in Albert Lea early in the morning of March 22 with a broken right arm and injuries to another part of her body. 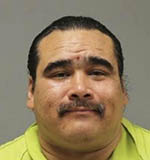 The victim allegedly identified Tafoya as having caused her injuries, and Tafoya stated he spanked her eight to 10 times as punishment after she acted up. He said she bent her arm the wrong way after he grabbed her by the arms in an attempt to force her to sit on the couch.

Court documents state Tafoya told medical staff he heard a pop after he tried to restrain her, and said his daughter kicked and bit him prior to the incident.

Law enforcement allegedly observed a “very large bruise” on the chin of the child’s mother that she said came from an argument she had with Tafoya that month.

Tafoya was reportedly arrested in a prior domestic violence incident between the two in 2013 in New Mexico. He was convicted of battery against a household member in July of that year in connection with the case. He was sentenced to 364 days incarceration, which was suspended for nearly two years to comply with probation.

His next court appearance is scheduled for June 1.