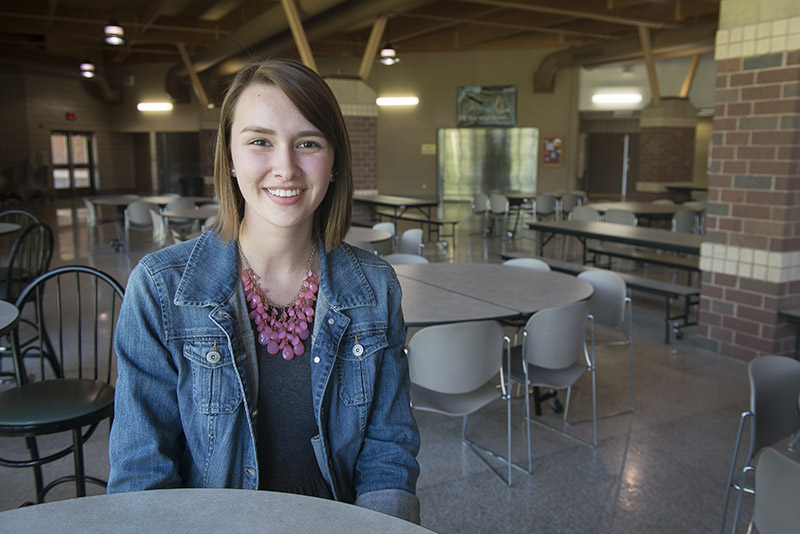 Lifelong Albert Lea resident Justine Nelson will graduate from Albert Lea High School on Friday. She plans to attend the University of Minnesota in the fall. Colleen Harrison/Albert Lea Tribune

For a high school senior, graduation brings with it different emotions.

Justine Nelson will graduate from high school on Friday. For her, it’s scary moving on to a completely different chapter in her life, but exciting at the same time.

“I’m terrified,” she said. “It’ll be good, but different from everything you know.”

The 17-year-old Albert Lea High School senior has been highly active in her community and her school for years. She was the student representative for the Albert Lea school board this school year and last; is this year’s student council president and National Honor Society vice president; plays the violin; is active in anything having to do with theater, from plays and musicals to chorale and show choir; and has been a personal care assistant for some students in the school district.

She plans to attend the University of Minnesota next school year to major in child psychology, and hopes to one day be a child psychiatrist. Nelson said she aims to pursue that line of work because she considers herself to be analytical, likes working with children and thinks it’s important that children have a healthy mindset growing up, as “it sets them up for their whole life.”

“I just know I want to help people,” she said.

The Albert Lea native — an alum of Lakeview Elementary School and Southwest Middle School — said she’ll miss the small-town atmosphere of Albert Lea and its school system when she moves to the Twin Cities in August. Nelson said she has liked that teachers she had in her earlier school years have been there along the way as she has gotten older. To her, one of the strengths of the Albert Lea Area Schools system is that there are more one-on-one teacher-student opportunities available when needed. She said there’s a close-knit community connection that comes with being in Albert Lea.

“I’ve really enjoyed it,” she said. “I’m really proud of our school system.”

Nelson said that the high school experience is what students make it, and advised younger students heading into high school to be active in their school and their community.

“Get involved, enjoy it,” she said. “It’s not going to be fun every second, but you’ll enjoy it if you let yourself.”

Interesting fact: is named after a character from “The Thorn Birds”