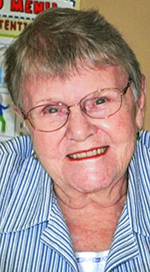 Being one of the first women lay pastors of her time, Agnes worked as an associate pastor for the ELCA, first at Lutheran Church of the Good Shepherd, then at Holy Triune and at Nativity Lutheran, where she served in the children’s ministry.

She was preceded in death by her parents; her husband; two sisters, Helene Zerrien and Selma “Sally” Johnson; and five brothers, Emil in infancy, Norman, Ole, Andy and Cliff Anderson.

A funeral service will be at 11 a.m. Wednesday at Nativity Lutheran Church, 3312 Silver Lake Road in St. Anthony, with the Rev. Glenn Seefeldt officiating. Interment will be at Lakewood Cemetery in Minneapolis. Visitation will be one hour prior to the service Wednesday at the church.