Carl Preston Douglas, 47, is charged with domestic assault by strangulation and terroristic threats. 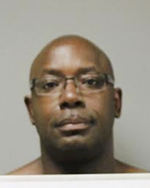 Court documents state Douglas was charged after the alleged victim, who was known to Douglas, said he accused her of cheating on him May 24, grabbing her by the throat and squeezing, causing her to have pain in her neck and have trouble breathing. She alleged Douglas threatened to kill her during the incident, and she said there were previous domestic violence incidents.

Douglas reportedly denied any physical altercation, saying there was a verbal argument.

Douglas was previously convicted of physical assault in April 2012.