Arlene Grace Bryson, 88, of rural Alden passed away Monday, May 15, 2017, at home with her family after complications from a heart attack in April.

Arlene enjoyed watching baseball, football and Hallmark movies and mysteries. She was proud to be a registered nurse and worked for 42 years at the Wells hospital. 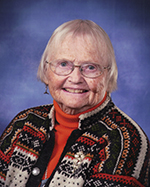 Arlene was the oldest daughter born to Carl and Fern (Fogue) Monson on Aug. 29, 1928. She grew up on a farm near Leland, Iowa, and walked two miles to country school until it was time for high school. She then moved into town and lived with her grandmother, Annie Fogue. Arlene was a hard worker on the farm, waitress at the restaurant, where her grandmother was the cook and played girls half-court basketball. After graduating from Forest City High School in 1946, she continued her education at Naeve School of Nursing in Albert Lea. She achieved her registered nurse credentials with the class of 1949. The annual luncheon of Naeve Alumni and Nurses’ Club was the highlight of her year. She loved sharing stories of nursing through the years. She was from back when they counted drips on the IVs, recycled by autoclaving instruments, sharpened needles to be used again and used real thermometers.

As one of the original employees of the newly built Wells Municipal Hospital that opened in 1950, Arlene was involved with assembling beds and furniture, stocking shelves and the emergency room and preparing for the first patients. During the baby boom in the 1950s, so many babies were born in Wells that they ran out of bassinets and converted peach crates for the newborns. She enjoyed the community and staff and being a nurse at the facility until it closed in 1992.

Arlene was united in marriage to William Hans Bryson on April 2, 1950, at Winnebago Lutheran Church in Lake Mills. Together Arlene and Bill operated their 376-acre grain and livestock farm in Freeborn County until they retired from farming in 1994. They were active in the maintenance of their land resources as part of their personal mission to leave something wild and natural for future generations.

Family time and a love of camping and travel included vacations to Lake Kabatogama, the north shore of Lake Superior, Yellowstone during the 1959 earthquake, Arizona, Colorado, the Rockies, Canada and 11 adventures to Alaska.

A pinnacle decade in their life was the lawsuit cited as Freeborn County vs. Bryson. After two trips to the Minnesota State Supreme Court, they stopped a road from going through a marsh they had purchased and enhanced for wildlife. This landmark case, tried under the new Minnesota Environmental Rights Act, highlighted the significance of protecting wetlands and brought national recognition to them.

Together the Brysons were avid birdwatchers and active in many conservation groups, including the Minnesota Ornithologist Union, Sierra Club, Nature Conservancy, national and local Audubon Societies and Parks and Trails. Arlene volunteered with Naeve Partners in Health, was president of the Soil and Water Auxiliary, a Sunday school teacher, in the Conger Mother’s Club, Music Mother’s and a 4-H health leader. She enjoyed the neighborhood birthday club, Crossroads Campers Club, traveling at the drop of a hat and helping others.

During her recent hospital stays she informed the staff she was B.C. — before computers and also penicillin. Back in the day nurses were always wearing a bright white nurses cap, white uniform, white stockings and white shoes — no nail polish, perfume or makeup allowed. When the roads were bad in the winter, Arlene would stay at the hospital for extended shifts for several days at a time as the roads were unpassable. She shared the night shift with a great group of nurses, nursing aides and distinguished medical doctors. Caring for others was always her priority. She was quick to smile and share a kind word with all. She loved sharing stories of working in a 32-bed hospital, growing up and living on a farm, and family adventures.

Chores were made into games and contests, just as well, enjoying being together no matter what the task at hand.

Arlene chose to be at home for her last days with her family. She always had a bright smile with those cheery dimples. Her great sense of humor and kind words were a joy to all.

Visitation will be from 4 to 7 p.m. today at Bonnerup Funeral Service in Albert Lea and one hour prior to the service. The funeral will be at 10 a.m. Friday at Redeemer Lutheran Church in Alden.