Arthur L. Kuchera, 72, of Austin died at his home surrounded by his wife and children early Thursday, May 4, 2017.

Art was born Feb. 2, 1945, in Albert Lea and graduated from Glenville High School in 1963. Shortly thereafter he began his career at Hormel Foods, where he worked in the cost department until he retired in 2006. He then became the city clerk of Mapleview.

On March 3, 1972, he married Susan Larson at St. Olaf Lutheran Church in Austin. The bond between Art and his wife, Sue, was impossible to miss, as one would rarely see one without the other. Their love was found in their commonalities, particularly their love of children and the outdoors. These shared interests led to their decision to devote their lives to serving others, which was evident in how they spent their free time volunteering for organizations like Boy Scouts of America, St. Olaf Lutheran Church, Veterans of Foreign Wars and Real Hope for the Hungry. While raising their three children together, they were extremely active in scouting, where Art came to earn the Silver Scout Award, a very esteemed award recognizing his example of hard work, self-sacrifice, dedication and many years of service. It is the highest level of achievement in Boy Scouts of America. 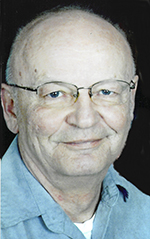 Art also received an award from the American Red Cross for having donated several gallons of blood over the course of his lifetime. He served as the president of the Men’s Auxiliary at the VFW club for 2016-17. As active members of St. Olaf Church, Art and Sue served on many boards and spent countless hours volunteering at their dining hall at the Mower County Fair.

The only thing loved more by Art than serving others and his community was his family. This was evidenced by his presence at all of his children’s and grandchildren’s sporting events and extracurricular activities.

He and Sue enjoyed camping and swimming and playing outdoor games with their children as pastimes. They participated in the Austin Horseshoe League from 1993 to 2016.

Art will be missed by all who knew him and it is believed that his legend will live on through the lives of those he touched.

He was preceded in death by his parents Charles (Eva) Kuchera and Eleanora (Clarence) Knutson-Peters; his brother, Harold (Deanne) Kuchera; and his sister-in-law, Marlene Larson.

Funeral services will be at 11 a.m. Wednesday at St. Olaf Lutheran Church in Austin. Todd Portinga, associate in ministry, will officiate. Visitation will be from 4 to 7 p.m. Tuesday at Worlein Funeral Home and one hour prior to the service at the church. Interment will be in Grandview Cemetery. Services are being prearranged and performed by Worlein Funeral Home of Austin. Condolences may be expressed to the family online at www.worlein.com.

The cancer benefit celebration for Art Kuchera continued as scheduled on Saturday at Mapleview Community Hall.