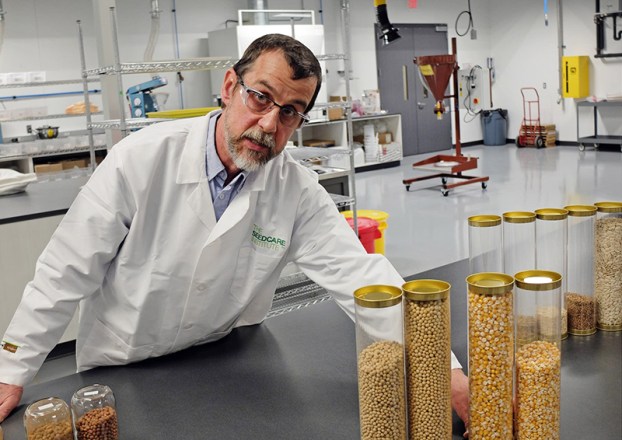 As seed treatment market grows in Minnesota, so do the concerns with certain pesticides

Many of the seeds being planted around Minnesota today are treated with chemicals to protect them as they grow.

Syngenta, one of the top pesticide companies in the world and the global leader in the treated seed market, has a seed research facility about an hour south of the Twin Cities near the tiny community of Stanton.

Ravi Ramachandran, who heads the Syngenta Seedcare Institute, says about 75 scientists work there developing and testing seeds and seed coatings.

“And in fact this institute is probably the most sophisticated research center for seed treatment technology in the industry if not around the world,” he said.

There are climate controlled rooms to see if seed coatings are affected by heat, cold or humidity. Seeds are run through planting equipment farmers use to make sure the coatings don’t stick or come off in the planters.

“And this will simulate a planting season at a given area at a given time,” said Wanderson Rodrigues Oliveira, who tests seed coatings in planting equipment.

Farmers have been treating seeds to protect them from disease and pests for hundreds of years — early treatments included lime, copper and mercury.

Seed treatments today are much more sophisticated. Fungicides target specific diseases, there are micro nutrients to help the seeds germinate and grow, and insecticides to kill bugs.

One of the facilities goals is to find the right combination that sticks to the seed before it’s planted, but comes off when seeds are in the ground so plants can use the chemicals as they grow.

“We might test 10 to 15 different recipes. It might take two months to come up with a recipe,” said Joseph Kuznia who works at the facility testing seed treatment recipes.

Reducing dust from seeds is especially important, it can expose bees to lethal levels of insecticide.

Most planting equipment uses forced air or vacuum to precisely space seeds in the ground. The systems require a lubricant like talcum powder so the seeds flow smoothly through the planter. But that powder is abrasive and rubs off some of the chemical on the seed. The resulting dust can cause the insecticide to drift with the wind.

Ramachandran says it’s an area where significant advances in research have been made in the past five years.

“There are some new advanced seed lubricant technologies coming to the market,” Ramachandran said. “For example for every 50 pounds you might add a cup, now we are talking about using a teaspoon. So a dramatic drop in the amount of material that could potentially be drifting.”

Few people outside of agriculture paid much attention to seed treatment until scientists started to question whether neonicotinoid insecticide was harming bees.

This year the Minnesota legislature rejected a proposal to allow the state ag department to regulate treated seeds.

Dave Flakne, Syngenta Senior Director of state affairs, says the chemicals are regulated before they are put on the seeds.

Syngenta said the the ag marketplace has embraced treated seeds.

“If farmers lost money, (they) will never pick a seed treatment today. So they fit very well into production agriculture, to the way we are farming today,” said Palle Pedersen, head of seed product marketing for Syngenta.

Pedersen said treated seeds are part of the reason corn and soybeans can now be planted in northern Minnesota and North Dakota. The seeds are protected from disease even if the soil is cold and wet in the spring.

As for the use of neonicotinoid insecticides, Pedersen says putting insecticide on the seed instead of spraying the entire field, actually reduces the amount of chemical used.

“These seed treatments, if you follow our recommendations and the way the label are written, it doesn’t hurt bees,” he said.

Neonicotinoid insecticide on a seed is taken up by the plant as it grows. It’s in the leaves, so it’s very effective at killing bugs that might munch on those leaves.

When first introduced in the 1990s neonicotinoid insecticide promised targeted pest control, killing only bad bugs that eat plants. But it turned out the insecticide can also end up in pollen gathered by bees.

The science around neonicotinoids and bees is still developing, but there are hundreds of scientific studies that show harm to bees.

The Environmental Protection Agency says insecticide exposure poses risk to bees and the Minnesota Department of Agriculture says all of the most widely used neonicotinoids are highly toxic to bees.

“We actually say some of our products are highly toxic to bees. So we’re not saying they’re not toxic to bees,” said Caydee Savinelli, an entomologist who leads Syngenta’s pollinator stewardship initiative.

But she insists the chemical won’t harm bees if used according to the label. She dismisses many studies linking neonicotinoids with harm to bees as not realistic compared to what happens in a farm field.

And she argues there needs to be more research and less emotion about pollinators.

“This is science that’s evolving, and it’s really important to sometimes, we get these concerns and everything and we have to address it through science and make sure we understand what’s going on,” Savinelli said.

Concern about neonicotinoid insecticides has been gathering momentum in the past few years and as a result pesticide companies launched research initiatives. Syngenta started a website called operation pollinator.

Savinelli said the focus should be on planting more flowers for bees so they have adequate food. She believes lack of food is a bigger risk for bees than insecticides.

By 2020 the seed treatment market is expected to approach $10 billion a year, and it’s also likely that by then scientists will know much more about the environmental impact.