Memorial services for Barbara Jensen will be at 11 a.m. Wednesday at First Lutheran Church in Albert Lea and will be officiated by the Rev. Sean Forde. Friends may greet the family one hour prior to the service. 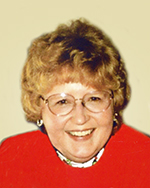 Barbara worked at Dixons Drive Inn and A&W Restaurant. She also worked at the Albert Lea Tribune and at Streater, before she began working at Riverland Community College for 25 years and ended her career there as the executive secretary to the dean.

Barbara was a member of First Lutheran Church. She was a member of the Neil Diamond Fan Club and attended over 15 of his concerts. She attended lunch groups and regularly met with a group that was called the Fab 4. She enjoyed filling her free time with gardening. She was a lover of animals — especially her cat, Caeser.

Barbara is preceded in death by her father, Harold “Bud” Schneider; father-in-law, Elwood (Red) Jensen; and numerous aunts and uncles.