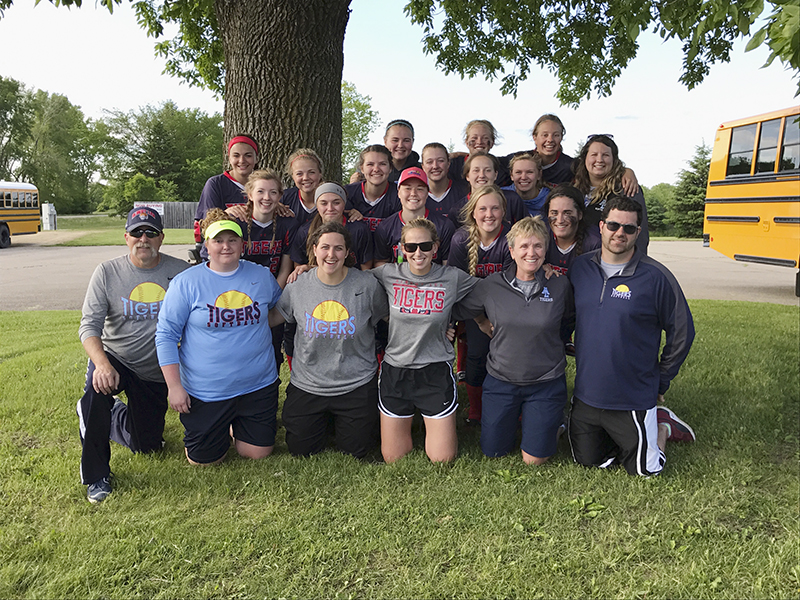 The 2017 Albert Lea softball team poses for one last photo after its season ended against Byron on Thursday. The Tigers lost 10-5. - Provided

Tigers softball team battles back, but ends its season against Bears

With its season on the line, the Albert Lea softball team needed a win against a Byron team that was just as desperate.

Falling behind 10-0, Albert Lea needed to score a run in the fifth inning to keep its season alive. The Tigers did so, but it wouldn’t be enough as they fell to the Bears, 10-5.

“The girls battled back through all seven innings,” Tigers coach Casey Kortz said. “They never gave up and that’s all I can ask for from them.”

Down 10-0, Albert Lea scored its first run when Madeline Fjermestad got on base and then stole two bases before crossing the plate.

Byron had an opportunity to end the game in the fifth inning, but Albert Lea’s defense closed the door.

With a runner on third base, Tigers center fielder Samantha Skarstad caught a fly ball and fired it to catcher Kathryn Flaherty, who applied the tag on the runner for the second out of the inning.

The Tigers would continue to battle over the next two innings, scoring four times, but eventually they came up short.

“They fought until the end because nobody was ready for the season to be over, but we came up short,” Kortz said. “I want to say thank you to the parents for the tremendous support this season and to my seniors for everything they’ve out into softball. They’ll be missed.”

Albert Lea finishes the season with a record of 4-18.