Charlotte passed away Thursday, May 18, 2017, at Good Samaritan Society of Albert Lea. She was 89.

Charlotte Galena Hanson was born Jan. 13, 1928, in Los Angeles to Charles and Gilma (Lien) Wiggins. At the age of 3, her family moved to Albert Lea where she attended school. 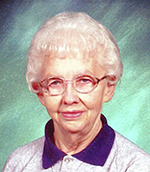 Following her schooling, she worked at the Wilson & Co. plant in the cafeteria as a cook for 35 years.

On Aug. 8, 1945, Charlotte was united in marriage to Glen “Ding” Hanson in Albert Lea. To this union two sons were born, David and Steven. Charlotte was a lifetime member of the Legion Auxiliary. She was a member at First Lutheran Church in Glenville. In her free time she enjoyed crafts, watching the Minnesota Twins and Vikings, and traveling to visit her family. She was an excellent cook and baker — meringue pie being her specialty.

She is preceded in death by her husband, Glen “Ding” Hanson; both parents; and a sister, Jane (Warren) Johnson.