Memorial services for Cora “June” Briggs Owen will be at 1 p.m. Saturday at United Methodist Church in Ellendale. The Rev. Randy Cirksena will officiate. Visitation will be one hour prior to the service. Bonnerup Funeral Service is handling the arrangements. 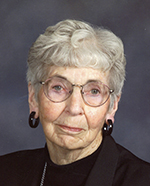 Cora June Russell was born to parents Glen O. and Audrey B. (Gromer) Russell on Aug. 10, 1922, in Bristow, Oklahoma, the second of seven siblings. She was raised in Sedan, Oklahoma. In her younger years, she loved to play softball and high school basketball. She graduated from high school in Sedan and Draughon’s Business College in Oklahoma City.

June was married to Otos Briggs on Feb. 7, 1941. Following their marriage, they worked in the defense plants in Kansas, returning to Oklahoma and farming. In 1952 the family moved to Clarks Grove and moved to their farm north of Ellendale in 1955. Otis died in August 1977.

June was employed by Jostens and Truth Inc. in Owatonna for 14 years, retiring as traffic manager in 1973.

She was an active member of United Methodist in Ellendale, where she taught Sunday school, Bible school and was active in women’s groups. In her free time, June liked to sew and do macrame. She also enjoyed traveling, playing shuffleboard, golfing and fishing with her grandsons.