Dora Louise Leonhardi was born March 9, 1911, on a farm north of Emmons. She was the daughter of John Martin Louis “Lou” and Ella Marie Louise (Freemott) Leonhardi. She was baptized at Bear Lake Church and confirmed at Emmons Lutheran Church. Dora attended grade school at Nunda Country School and graduated from Emmons High School in 1927. After graduating from Winona State College in 1929, she taught country school at Freeborn, then moved to Osage, Iowa. There she taught the Palmer Method of Penmanship to seventh- and eighth-graders and then taught American history for 12 years. 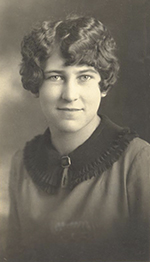 During World War II, Dora worked for the Air Force teaching basic electronics in Madison, Wisconsin, and was then transferred to Boca Raton, Florida. After moving to California in the late 1940s, she ran into one of her former Air Force students, Richard Oney, in a gas station. They started dating and were married Sept. 3, 1948. Dora got a job at Mather Air Base, where Richard was serving, and she worked there for 26 years. She and Richard bought acreage near Loomis, California, built a house and planted almond trees and sold almonds.

In summer 2005, Dora sold her home and moved to Realife Cooperative in Waseca, where she made many good friends. In June 2014 she moved to Lakeshore Inn following some health issues. 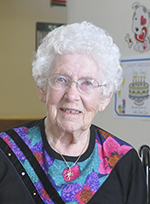 Dora was the oldest of five sisters — three of them preceded her in death: Edna Olson of Mason City and later Eden Prairie, Lillian Andersen of Lake Mills and Lucille Greeney Anderson of Waseca.

She is survived by one sister, Nylene Sherman, of Cambridge, Maryland; and many nieces, nephews and friends.

A celebration of her life will be at 3 p.m. June 4 at Grace Lutheran Church in Waseca.

May she rest in peace. Blessed be her memory.