A private service for Dorothy Hendrickson’s family will take place Saturday. Bonnerup Funeral Service is assisting the family. Inurnment will be in Lakewood Cemetery in Minneapolis at a later date. Dorothy M. Hendrickson passed away on April 29, 2017, at St. John’s Lutheran Community in Albert Lea.

Dorothy was born on Aug. 8, 1918, in Story City, Iowa, to parents George and Margaret (Boyd) Allen. Her parents died shortly after she was born, so Dorothy was raised in Iowa by her grandmother. She attended country school until eighth grade. 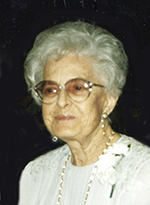 At age 15, Dorothy was united in marriage to her husband, Leslie M. Hendrickson, on Feb. 26, 1933, in Northwood, Iowa. Together they made their home in Albert Lea and were members of First Lutheran Church. While Leslie was serving his country in World War II, they briefly lived in Aurora, Colorado, with their young daughters, Shirley and Patricia.

Dorothy briefly worked at Wallace’s Department Store during the war and was a homemaker. She was artistically talented and very creative, helping design and build homes. She would have made a fantastic architect.

Leslie and Dorothy were involved with the Arabian Horse Association and spent many hours caring for their horses. Dorothy had a love of all animals, especially her German Shepherds. Most of all, she loved her family and spending time with her grandchildren.

She was preceded in death by her parents; husband, Leslie; daughter, Shirley; great-granddaughter, Lori Brua; and son-in-law, Chuck Krueger.