Dozens come together to pray for community 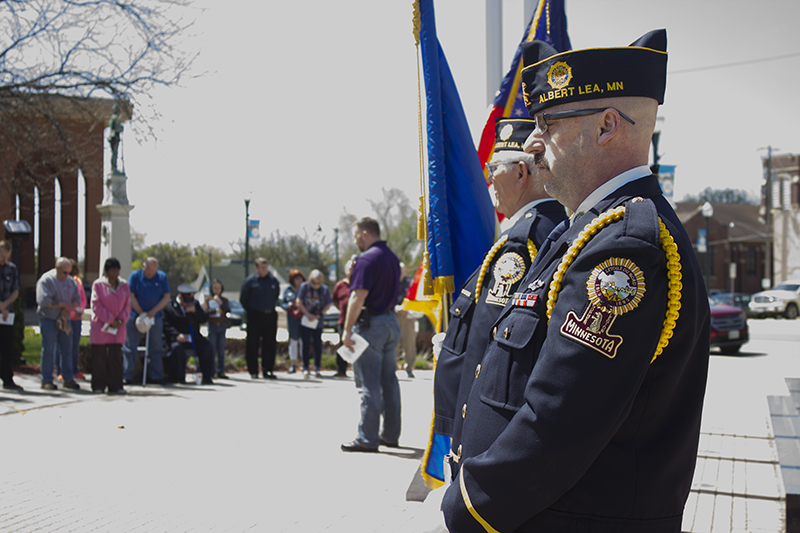 Dozens of people gathered Thursday at the Freeborn County Courthouse to recognize their faith and pray for people around the world.

The event was for National Day of Prayer, a day organizers said is meant to mobilize prayer in America and encourage personal repentance and righteousness.

“I just pray for their families,” she said.

Freeborn County Sheriff’s Office Detective Ryan Shea prayed for law enforcement, the nation’s military and first responders. He prayed frayed relationships between police and communities can be mended, that local officers are safe and protected, and that officers would not forget the needs of the community. Prayers were also given for persecuted Christians around the world, as well as American businesses and media.

Kelli Fiscus, who worships at New Life Christian Church, led the singing of the national anthem and “God Bless America.”

Jean Karau shared her story of how prayer has touched her life. Karau, who had safety concerns about a 1996 Buick Regency she owned, said she prayed she could receive a 2015 blue Honda Pilot. She recalled the series of events that led her to owning the vehicle.

“Praise the Lord,” she said.

The Rev. Vern Harris, pastor at New Life Christian Church, prayed for persecuted Christians. He said despite persecution believers face around the world, their faith has been strengthened.

“That must be because of the will of God and the power of his spirit,” he said.

Following the event, attendees discussed the effect faith has on their lives.

“He’s everything,” Fiscus said. “He’s who I live for. He’s the reason I base my life decisions on.”

Albert Lea resident Jacob Weitzel said he attended to show his support for his faith.

“I believe in the power of prayer,” he said. “It’s spoken in scripture that ‘where two or more come in my name, I will be there.’ I am showing my support for my Christian family, the body of Christ around the world and especially this nation, which needs to come into repentance.”

To Weitzel, faith in God is essential.

“It’s everything,” he said. “It’s basically being saved from despair and hopelessness of this world.”

An evening National Day of Prayer gathering was planned for Thursday at AZ-One Community Center.