The updated funeral arrangements have been set. Funeral services for Duane A. Lee will be at 1 p.m. Friday at First Presbyterian Church in Albert Lea. The Rev. Dwight Netzer will officiate. Visitation will be from 5 to 7 p.m. Thursday at the Bonnerup Funeral Service chapel. Coffee and cake will be served after interment at the church. Interment will take place at Greenwood Cemetery, with the Albert Lea area veterans organizations performing military honors.

Duane Alvin Lee was born Sept. 19, 1932 in Glenville to Melvin and Mary (Waldo) Lee. He grew up in the Glenville and Albert Lea areas. Enlisting early, Duane joined the Army National Guard at the age of 16. He would serve his country in the Korean War, and continue to serve as a member of the National Guard for a total of 34 years. 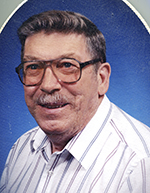 Aside from the Guard, he worked at Wilson & Co. for 32 years, Queens Stove and the Freeborn County Co-op.

Duane was very proud of his service. He was a lifetime member of the American Legion, and was active in the honor guard. Duane was the third longest serving serviceman in the Minnesota Army National Guard. He was also a member of the Albert Lea Clown Troop in Albert Lea, where he was a clown in many parades.

Duane and his wife, Marie, loved to travel. They wintered in Arizona, Texas and Florida their entire marriage. The couple also enjoyed dancing. Woodworking, playing cards and camping were some of Duane’s favorite things. In his early years, Duane was a part of the Falcons Motorcycle Club in Albert Lea in the 1940s and ’50s. He had a great sense of humor and could make anyone laugh. Above all, Duane loved his family, his friends and his country.

He is preceded in death by his first wife, Lois; both parents; brother-in-law, Harold Frerichs; and a step-grandson, Lee Ranta.