Ground zero in the battle against measles is in south Minneapolis 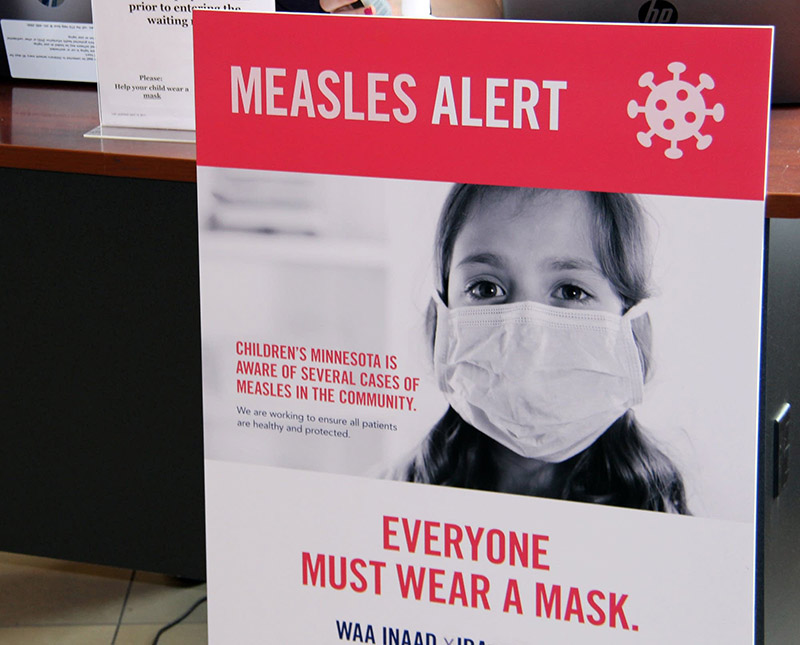 It’s on Chicago Avenue at Children’s Minnesota’s Minneapolis campus. That’s where most of the infected children are ending up during the current measles outbreak.

If you step into the emergency department or the primary care clinic there, you’ll be asked a barrage of questions about measles symptoms and exposure, and told to put on a face mask.

“The sick and the well are wearing masks. Hand hygiene and cough stations are all over with signage telling people to be cautious,” said Patsy Stinchfield, who’s in charge of preventing disease transmission at Children’s.

The Somali-American community has been hit hardest by the outbreak. And while there’s been a rush to immunize children against the measles, experts said the outbreak is looking more like a marathon than a sprint.

“I don’t really see an end in the near future,” Stinchfield said.

Containing the virus is key. If measles is suspected in a patient at Children’s, they’re taken to a “negative-airflow” room — which exhausts potentially contaminated air out of the facility, helping to reduce the risk of airborne transmission.

Outreach is another arm of the effort to stop this measles outbreak.

Dr. Dawn Martin, a pediatrician at Hennepin County Medical Center, said the facility has compiled a list of patients missing the first of two doses in the MMR vaccine.

“Those young infants are our priority and we have over the last several weeks made hundreds of phone calls to those families,” Martin said.

HCMC nurses work the phones trying to convince parents to get their kids vaccinated, and it appears to be paying off. The Minnesota Department of Health said that over the past two weeks, Somali-American children are getting immunized against measles at a rate of 500 shots a week — 17 times the normal rate.

That’s a key group to get immunized against measles, because vaccination rates in the Somali-American community are well below average. Anti-vaccination advocates spread false information that the MMR vaccine causes autism, and the fears stuck.

It’s been busy lately at the People’s Center Health Services, the community health center in the Cedar-Riverside neighborhood — the heart of the Twin Cities’ Somali-American community.

Awareness of measles is translating into clinic visits, said Dr. Steve Vincent the People’s Center chief medical officer. “I think we gave out about 70 doses in one week, which is like about tenfold what we give usually.” Vincent said. “We had to order another 200 doses anticipated increased demand, and demand has continued.”

She worked at Children’s in St. Paul back in 1990 during the biggest measles outbreak since the current one. The ‘90 outbreak took the lives of three children.

Children’s transformed an entire floor into a measles ward to keep the kids with measles away from other patients, Stinchfield recalled. She said it’s possible similar measures could be needed this time too.