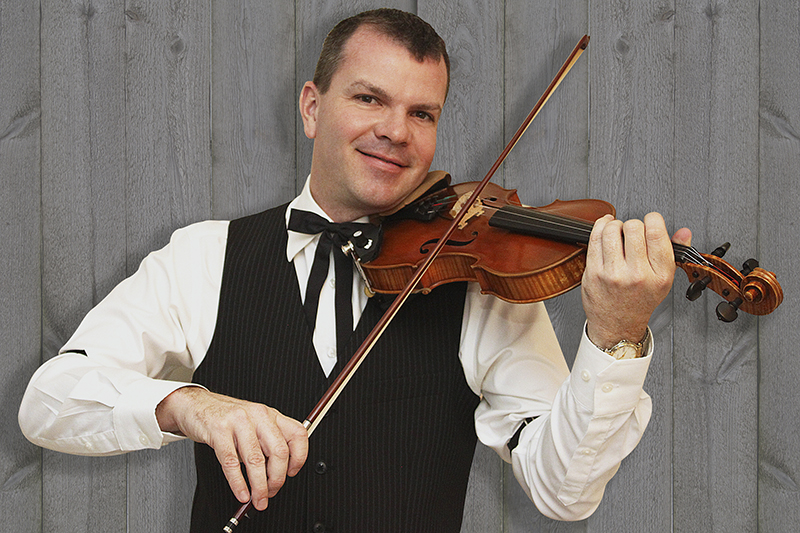 It is a show, not just a concert, according to Woods.

“We have very much a show that caters to the general population,” he said. “I mean, we play fiddle music and traditional country and some gospel music and stuff, but we try not to build it towards that crowd specifically.”

Woods got the name “The Flippin’ Fiddler” because he performs trick fiddling during the show. The tricks include a somersault and walking on rolling barrels as he plays his violin.

Woods said you don’t have to be a fiddle fan or a country music fan by any means to enjoy the show, and admitted that even as a fiddle player, he would get bored watching two hours of fiddling.

The band travels and performs for charity organizations such as church groups, agricultural societies and community service organizations.

“We have been doing (charity concerts) for about 15 years as kind of our main focus for our shows, and it is just a real win-win for those communities because the proceeds for those concerts stay in the community and it helps,” Woods said. “A lot of them are either doing mission work or they are doing local community outreach or community betterment of some kind, so it kind of warms our hearts to know that — not only do we get to play the music that we love and meet some great people — but the proceeds are also doing some good instead of lining some agent’s pocket somewhere in some big city.”

According to his website, Woods’ father, Merv Woods, started The Merv Woods Orchestra in Ontario, Canada, around 1950. The orchestra played for fundraisers and charity events.

Merv and Carolyn Woods were married in 1960. Scott Woods was the youngest of their four children, all of whom studied piano and violin from a young age.

“When I was 4, I couldn’t wait to get my first violin and start playing fiddle the same as the rest of the family,” Scott Woods said.

Scott Woods started performing in his family’s band and competing at fiddle competitions across United States and Canada when he was 8 years old.

“I was very fortunate to have that opportunity to go and compete and perform and, you know, it kind of cuts your teeth on the stage in those kind of environments,” he said. “It is kind of nerve wracking but at the same time it is a really good experience.”

According to a press release, Scott Woods has captured all the major Canadian fiddling titles, including Canadian Open Fiddle Champion, Canadian Grand Masters Fiddling Champion and Canadian Fiddle Entertainer of the Year. He has several recordings to his credit, which will be available at the concert.

Tickets for Scott Woods and the Twin Fiddle Express are available at the ALHS box office. The concert is at 7:30 p.m. May 13 in the high school auditorium. Tickets will be on sale 45 minutes prior to the start of the show. Tickets for the concert series are priced by Albert Lea Civic Music. The ticket includes admission to 15 concerts per season. The Scott Woods show is the last concert of the season, but the price remains the same: $45 for adults, $15 for students and $95 for a family.

More information on the concert series can be found at www.albertleacivicmusic.com.

What: Scott Woods and the Twin Fiddle Express