Funeral services for Illena Sletten will be at 10:30 a.m. Wednesday, May 10, 2017, at Bonnerup Funeral Service in Albert Lea. The Rev. John Holt will officiate. Visitation will take place one hour prior to the service. Interment will be in Graceland Cemetery.

Illena passed away on Saturday, May 6, 2017, at Good Shepherd Nursing Home in Sauk Rapids. She was 84. 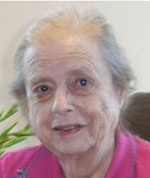 Illena Maxsena Henrichs was born Aug. 2, 1932, to Hemme and Kate (Sloter) Henrichs in Albert Lea. She attended and graduated from Albert Lea High School in 1950. She began working alongside her family in the family business, Henrichs Laundry, where she was in charge of bookkeeping.

In her early years, Illena liked to crochet, cook and took her family on many trips. She enjoyed keeping up with politics, was always recent on technology and enjoyed gardening. Genealogy was a favorite hobby of hers. Being the bookkeeper that she was, genealogy came natural to Illena. She spent many years tracking down family history, even learning to read Norwegian and German along the way. She was a part of many genealogy organizations, including Ostfriesen Genealogical Society and Valdres Samband.

She is preceded in death by her parents Hemme and Kate Henrichs; husband, Marcus Delmaine Sletten; and siblings George Henrichs, Ben Henrichs and Hemme “Bud” Henrichs.