Memorial services for Jesse Myron Cole of Albert Lea will be at 11 a.m. Friday at Bonnerup Funeral Service, 2210 E. Main St. in Albert Lea. The Rev. Robert Stohlmann will officiate. Visitation will be from 4 to 7 p.m. Thursday at Bonnerup Funeral Service and one hour before the service on Friday at the funeral home. Interment will be at 3 p.m. Friday in Kerns Oak Grove Cemetery in North Mankato. Military honors will be accorded by the Mankato Area Veteran’s Memorial Squad. 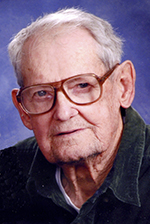 Jesse was born Aug. 18, 1929, in Mankato, the son of Clifford and Evelyn (Stewart) Cole. He graduated from Mankato High School and then served his country in the U.S. Airforce, where he was a weapon and ski instructor.

He married Arlene Church on Oct. 3, 1951. They lived in Denver, where their son, Garrett, was born. Jesse and Arlene made Albert Lea their home in January 1964. Jesse worked at Progress Castings in quality control for more than 33 1/2 years before retiring. He later ran Cole’s Bait Shop with his son, Garrett.

He was a member of Zion Lutheran Church. Throughout his life he enjoyed downhill skiing, fishing, hunting, gardening and loved being outdoors.

Jesse is survived by his wife, Arlene; his son, Garrett, and his wife, Beth, of Albert Lea; grandchildren Heather (Scott) Johnson and children Emily and Benjamin, Cody Bennett (Cassandra Laite) and children Avah, Honey and Alexis; sister, Sandi Ganske, of Mankato; and many nieces, nephews and cousins.