Funeral services for Margaret A. Bergland of Albert Lea will be at 2 p.m. Thursday at Grace Lutheran Church, 918 Garfield Ave. in Albert Lea. The Rev. Kent Otterman will officiate. Visitation will be from 4 to 7 p.m. today, at Bonnerup Funeral Service and one hour before the service at the church. Interment will follow the service at Hillcrest Cemetery in Albert Lea. 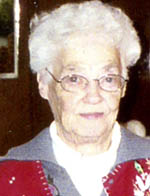 Margaret was born Oct. 4, 1922, to Leo and Grace (Qualey) Whelan in Mansfield. She grew up on the farm, which was always near to her heart. She graduated from Albert Lea High School.

Margaret married Helmer A. Bergland on Oct. 24, 1942, at the parsonage in Lake Mills.

Margaret and Helmer made Albert Lea their home, where she worked for the Desota Egg plant for more than 18 years.

She loved to play bingo. She enjoyed filling her free time with embroidering and making dish towels and pillowcases. She was an avid gardener and loved all kinds of flowers.

She served as the neighborhood grandma, in addition to her grandchildren she loved and cared for several special neighborhood children.